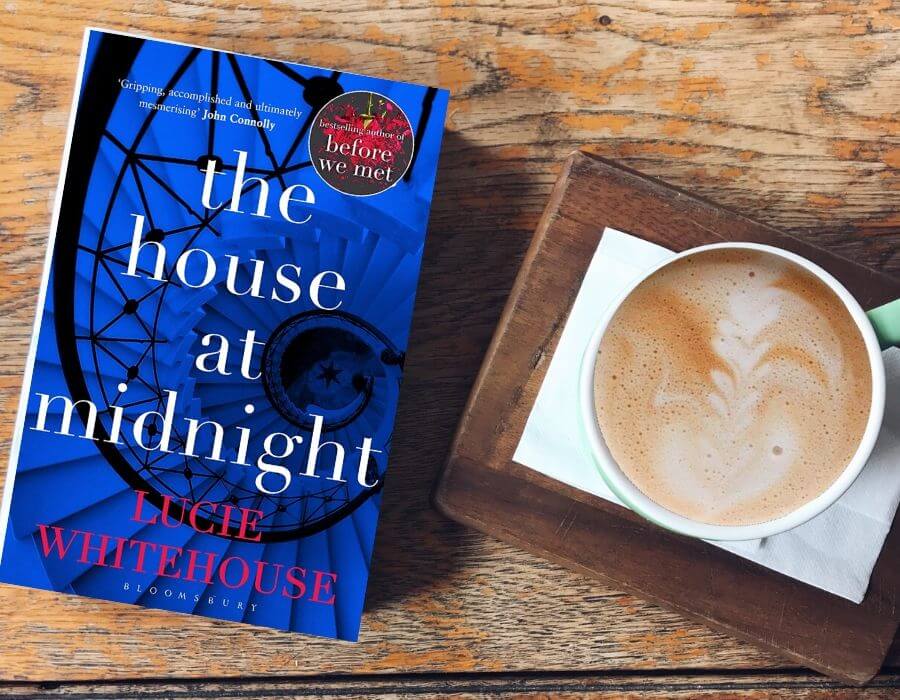 On my last day of interning at Bloomsbury, I was told to help myself to books on my way out, a suggestion I took perhaps quite too literally as I soon found myself wandering through Soho with a stack of books piled under both arms, and one wedged under my neck for good measure.

Amongst the books I chose was Lucie Whitehouse’s debut offering – The House At Midnight, enticed by both the front cover (I’m a sucker for aesthetics) and the novel’s comparison’s to both Rebecca and The Secret History. The sort of tale that hooks its reader from the very first page, The House at Midnight is a gripping tale from the get go.

Set deep in the rolling grounds of an Oxfordshire manor house, one balmy, stormy summer, the atmospheric setting of the novel is as prominent a character as any of the friends around which the tale revolves. Not dissimilar to Du Maurier’s Manderly is Whitehouse’s rolling Stoneborough Manor, left to Lucas by his eccentric late uncle following an untimely and mysterious death. And while the remote country house began as a refuge for the group of friends, Lucas soon becomes obsessed by both his uncle’s death and the discovery of cine films from Stoneborough Manor thirty years ago which depicted a group of friends disturbingly similar to his own. Claustrophobic and decadent, the house quickly seeps a sinister and consuming energy causing tension and insurmountable rifts in relationships as its haunting past makes its way in to the present.

The House at Midnight boasts the perfect blend of ingredients for a gripping gothic horror. Intimately drawn characters, a fast-past and evocative plot and the use of pathetic fallacy and an oppressive setting make a compelling and captivating read.

About The House at Midnight

On an icy winter weekend, seven friends celebrate New Year’s Eve at Stoneborough, a grand manor in the English countryside. They’ve been brought together by Lucas Heathfield, a young man who recently inherited the property after the tragic death of his uncle Patrick. Though still raw from the loss of his last family member, Lucas welcomes this tight-knit group of friends to the estate he hopes will become their home away from home-an escape from London where they can all relax and rekindle the revelry of their college days.

Lucas’s best friend, Joanna, finds herself oddly affected by the cavernous manse, with its lavish mythological ceiling mural and sprawling grounds, and awakened to a growing bond with Lucas. Much to her surprise, he reveals that he’s loved her for years. But as they begin to find their way from friendship to romance, Joanna can’t shake the feeling that the house is having its own effect on them.

Back in London, Joanna is stunned when Lucas announces that he and their impetuous friend Danny are moving into Stoneborough full-time. Her concern seems justified as Lucas, once ensconced, becomes completely ensnared in the turbulent past that seems to haunt the house – a past that is captured in old movie reels featuring Lucas’s now-dead family: his charismatic uncle Patrick, his lovely mother, Claire, and his golden-boy father, Justin.

Over one decadent, dramatic year, as the friends frequently gather at the shadowed residence, secrets slide out and sexual tensions escalate, shattering friendships and forever changing lives. And all the while, the house cradles a devastating secret.

By turns taut and sensual, mesmerizing and disturbing, The House at Midnight is a gripping psychological novel that pulls the reader into the thrall of its ominous atmosphere. Newcomer Lucie Whitehouse has written a tense and captivating story that will linger long after the final, shocking pages.

1975 and grew up in Warwickshire. She studied Classics at Oxford University and then began a career in publishing while spending evenings, weekends and holidays working on the book that would eventually become THE HOUSE AT MIDNIGHT.

Having married in 2011, she now divides her time between the UK and Brooklyn, where she lives with her husband. She writes full time and has contributed features to the Times, the Sunday Times, the Independent, Elle and Red Magazine.

Have a read of The Book Bag’s review of The House at Midnight, and this write up by Amanda Craig for The Independent it fab. Project Lectito also did a great Q+A with author Lucie Whitehouse, which you can read here.