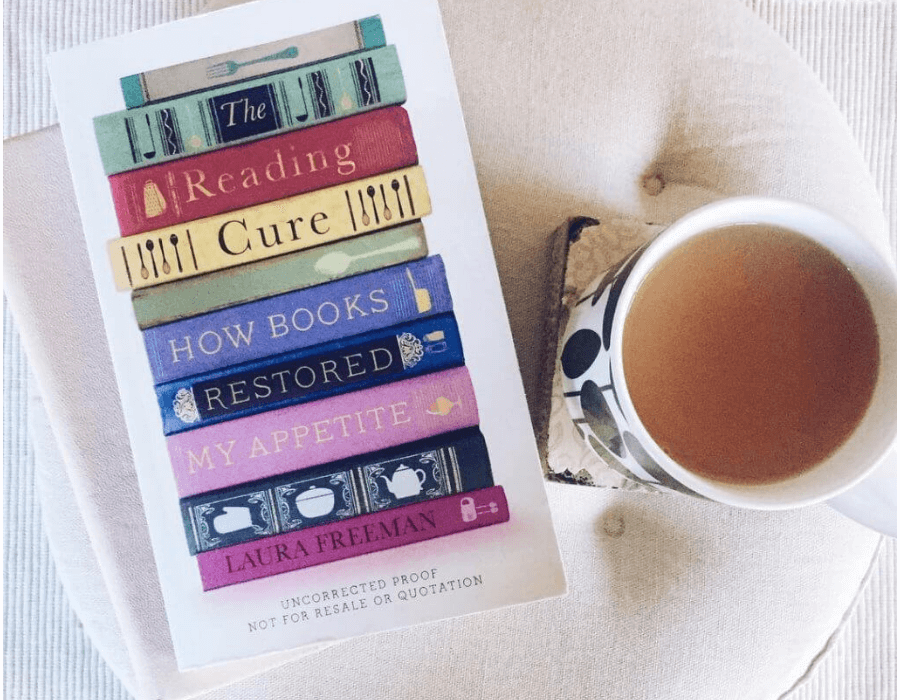 When The Sunday Times / Peters Fraser + Dunlop Young Writer Of The Year Award, in association with The University of Warwick announced their shortlist, I was delighted to see Laura Freeman’s The Reading Cure on the four-strong list.

As a big fan of books about books, I’ve read a number of tales whose central focus has been tomes; Susan Hill’s brilliant Howard’s End is on the Landing; followed by Jacob’s Room is Full of Books, Shaun Bythell’s witty and wry The Diary of a Bookseller; most recently Lucy Mangan’s brilliantly bookish Bookworm – a memoir of childhood reading that took me on the most nostalgic of trips down memory lane to a childhood shaped by books. And so it was that I read Laura’s memoir – The Reading Cure: How Books Cured My Appetite – with great delight.

Despite the fact that much of the memoir is about anorexia; a condition that Freeman was diagnosed with aged fourteen, The Reading Cure is still an uplifting tale, that – perhaps unsurprisingly given its name – one wants to savour and relish as one would a meal.

A book about both Freeman’s eating disorder and her love for literature, it is ripe with nostalgia as Freeman looks back on her infancy, and young adulthood, through to her current life as a freelance writer and speaks of both the foods and books that shaped the various stages of her life.

She writes about the frequent foodie fare that peppers Dickensian stories that stirred her own relationship with food; the stories from Hardy that inspired her to try dairy; her fondness for Virginia Woolf and the bread, the blackberries and the biscuits about which she wrote. Ultimately a tale of addiction and redemption; about getting better again; about the impact of books and the characters and food therein, The Reading Cure is a wonderful memoir that will encourage its readers’ to live a life filled with the creme de la creme of literature and the finest of foods.

Freeman’s writing throughout is beautiful and bountiful; her descriptions of food are full of flavour and temptation; her journey to wellness an inspiring one. It too, is a wonderful reminder of the power of books and their healing nature; whatever your ailment may be.

Laura Freeman is a freelance feature writer and critic. She read History of Art at Cambridge, graduating with a double first in 2010. She was a commissioning editor on the features/comment desk at the Daily Mail from 2011-2015 and was shortlisted for Feature Writer of the Year at the 2014 British Press Awards. She writes for the Daily Mail, Daily Telegraph, Spectator, Standpoint, TLS, Evening Standard and Slightly Foxed.

About The Reading Cure

At the age of fourteen, Laura Freeman was diagnosed with anorexia. She had seized the one aspect of her life that she seemed able to control, and struck different foods from her diet one by one until she was starving. But even at her lowest point, the one appetite she never lost was her love of reading.

As Laura battled her anorexia, she gradually re-discovered how to enjoy food – and life more broadly – through literature. Plum puddings and pottles of fruit in Dickens gave her courage to try new dishes; the wounded Robert Graves’ appreciation of a pair of greengages changed the way she thought about plenty and choice; Virginia Woolf’s painterly descriptions of bread, blackberries and biscuits were infinitely tempting. Book by book, meal by meal, Laura developed an appetite and discovered an entire library of reasons to live.

The Reading Cure is a beautiful, inspiring account of hunger and happiness, about addiction, obsession and recovery, and about the way literature and food can restore appetite and renew hope.