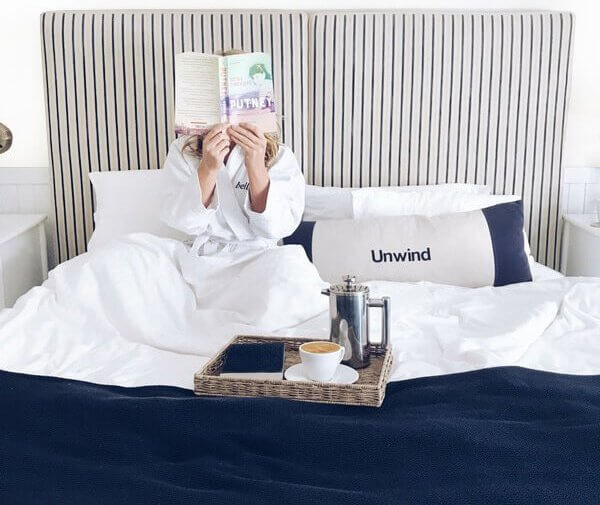 I’ve read so many brilliant books of late that I’m beginning to sound like something of a broken record. No sooner had I compiled a blog post on my favourite books of the year so far, than just a week later I find myself reading yet another brilliant book that will be given the same accolade. The latest on my list of must-reads? Putney by Sofka Zinovieff.

I was told to read it by my lovely friend Hermione, and so while on a weekend retreat to the beautiful Bells at Killcare on the central coast, I packed it in my overnight bag, eagerly looking forward to a lazy morning in bed with said book. The problem with starting a book like Putney while away with a friend is that it can often mean I become rather antisocial, wanting to do little else than find myself a reading nook to curl up and read. Thankfully the friend with whom I was traveling had some work to get on with, and so I was free to spend an indulgent morning on our balcony reading Putney, surrounded by silence and accompanied by copious cups of tea.

An unputdownable book from its very first page, Putney starts in 1970s London when thirteen-year-old Daphne and her father’s friend Ralph, an up-and-coming composer, start an illicit relationship.

Years later, while Daphne remembers both the relationship and Ralph fondly, childhood friend Jane convinces Daphne that what went on was in fact child abuse, and together they confront the demons and betrayal that lay beneath what had previously seemed an idyllic and bohemian childhood.

Told from the point of view of abuser, victim and witness – Ralph, Daphne and Jane – the tale flits between the past and the present, and offers readers an intimate insight into their own reality surrounding the events and the very real repercussions for all three protagonists.

A daring tale about the far-reaching repercussions of an illicit relationship, that explores consent, agency, and what we tell ourselves to justify what we do, and what others do to us, Putney is an absorbing and unputdownable read with rich and evocative prose, utterly convincing characters, and a stunning sense of place and atmosphere. With a pacy plot and a very timely topic, it will have readers gripped until its very end, and will no doubt leave them wanting more from this wonderfully talented storyteller.

Buy Putney by Sofka Zinovieff on Amazon or from Waterstones.

It is the 1970s and Ralph, an up-and-coming composer, is visiting Edmund Greenslay at his riverside home in Putney to discuss a collaboration. Through the house’s colourful rooms and unruly garden flits nine-year-old Daphne – dark, teasing, slippery as mercury, more sprite than boy or girl. From the moment their worlds collide, Ralph is consumed by an obsession to make Daphne his.

But Ralph is twenty-five and Daphne is only a child, and even in the bohemian abandon of 1970s London their fast-burgeoning relationship must be kept a secret. It is not until years later that Daphne is forced to confront the truth of her own childhood – and an act of violence that has lain hidden for decades.

Putney is a bold, thought-provoking novel about the moral lines we tread, the stories we tell ourselves and the memories that play themselves out again and again, like snatches of song.

Sofka Zinovieff is the author of four previous books, including The Mad Boy, Lord Berners, My Grandmother and Me, and has worked as a freelance journalist and reviewer, her work appearing in the Telegraph Magazine, the Times Literary Supplement, the Financial Times, the Spectator, the Independent Magazine, and the London Magazine. After many years in Athens, she now divides her time between Greece and England. She is married with two daughters.