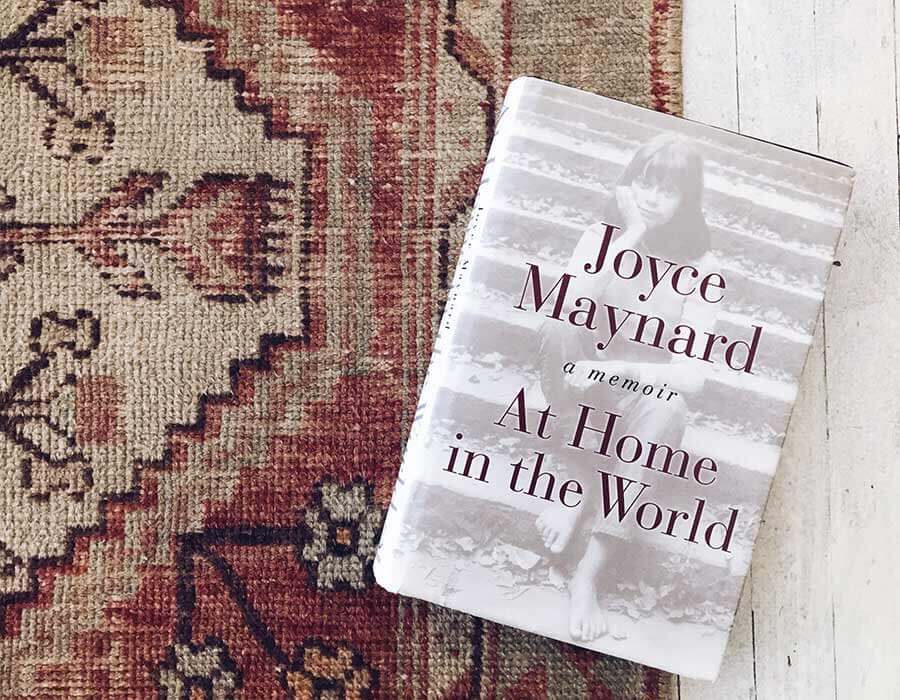 I started reading At Home in the World by Joyce Maynard en route to Antigua. I had originally hoped to finish it prior to the start of the memoir writing retreat Joyce was running on her home in Lake Atitlan, but alas, my copy only arrived the day before I left London, leaving me little time to do so.

Probably Joyce’s best-known book, At Home in the World is a memoir that recounts, among other things, her relationship with J D Salinger, and the inclusion of such saw her ridiculed by many reviewers. Reading At Home in the World, while simultaneously getting to know Joyce in person, both as a mentor and a friend, was certainly a first for me as a reader, and consequently it’s a book that will always hold a special place in my heart.

Famously cited as ‘shameless’ for including details of her relationship with Salinger in her memoir, At Home in the World in much more than a tell-all about the affair she had with the famously reclusive novelist. It’s a story about her childhood and upbringing by two highly educated and – at times – eccentric parents, her passion and perseverance for writing, that saw her first published in The New York Times aged eighteen, her brief spell as a freshman in Yale; her marriage and experiences of motherhood. And so, while Salinger does play a part in her memoir, he is simply a chapter in the context of what is a much larger story.

There is much I loved about this book. I loved reading about Maynard’s upbringing In New Hampshire, raised by an alcoholic and artistic father and a mother who passed her passion for writing onto her two young daughters. I loved the complicated relationship between Joyce and her older sister Roma; one that was often ripe with rigidity and strain. I loved reading about Maynard’s new-found relationship in the aftermath of her affair with Salinger, her take on the nuances of motherhood, and the open and honest way in which she writes about all of her kinships. I found solace in her self-doubt, and admired her strength and tenacity when faced with marital breakdown, the hardships of motherhood and the desire to provide a stable home for her children.

A powerful and poignant read for anyone who has struggled to feel at home in the world, for anyone whose voice has been silenced, whose struggles have been shut down, Joyce’s memoir is compelling and brutally honest, and will remain one of my most prized bookish possessions.

About At Home in the World

When it was first published in 1998, At Home in the World set off a furor in the literary world and beyond. Joyce Maynard’s memoir broke a silence concerning her relationship–at age eighteen–with J.D. Salinger, the famously reclusive author of The Catcher in the Rye, then age fifty-three, who had read a story she wrote for The New York Times in her freshman year of college and sent her a letter that changed her life. Reviewers called her book “shameless” and “powerful” and its author was simultaneously reviled and cheered.

With what some have viewed as shocking honesty, Maynard explores her coming of age in an alcoholic family, her mother’s dream to mold her into a writer, her self-imposed exile from the world of her peers when she left Yale to live with Salinger, and her struggle to reclaim her sense of self in the crushing aftermath of his dismissal of her not long after her nineteenth birthday. A quarter of a century later–having become a writer, survived the end of her marriage and the deaths of her parents, and with an eighteen-year-old daughter of her own–Maynard pays a visit to the man who broke her heart. The story she tells–of the girl she was and the woman she became–is at once devastating, inspiring, and triumphant.

Joyce Maynard first came to national attention with the publication of her New York Times cover story “An Eighteen-Year-Old Looks Back on Life” in 1973, when she was a freshman at Yale. Since then, she has been a reporter and columnist for The New York Times, a syndicated newspaper columnist whose “Domestic Affairs” column appeared in more than fifty papers nationwide, a regular contributor to NPR. Her writing has also been published in national magazines, including O, The Oprah Magazine; Newsweek; The New York Times Magazine; Forbes; Salon; San Francisco Magazine, USA Weekly; and many more. She has appeared on Good Morning America, The Today Show, CNN, Hardball with Chris Matthews, Charlie Rose, and on Fresh Air. Essays of hers appear in numerous collections. She has been a fellow at Yaddo, UCross, and The MacDowell Colony, where she wrote her most recently published novel, Labor Day.

The author of many books of fiction and nonfiction, including the novel To Die For (in which she also plays the role of Nicole Kidman’s attorney) and the bestselling memoir, At Home in the World, Maynard makes her home in Mill Valley, California. Her novel, The Usual Rules—a story about surviving loss—has been a favorite of book club audiences of all ages, and was chosen by the American Library Association as one of the ten best books for young readers for 2003.

3 comments on “Review: At Home in the World – Joyce Maynard”