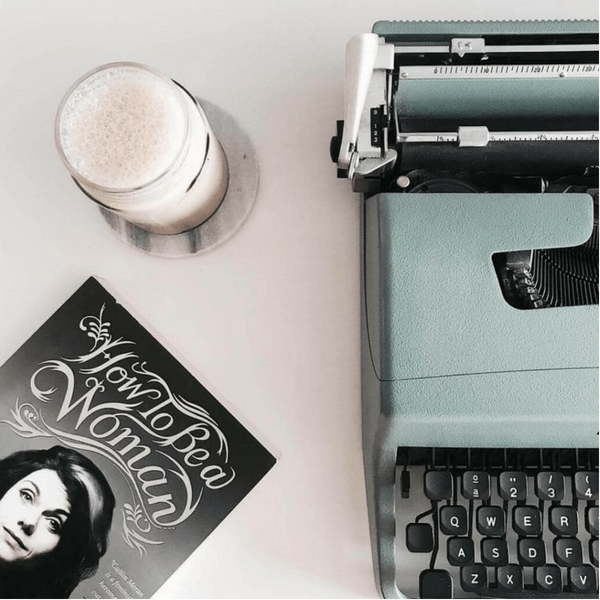 Buying me a Christmas present isn’t always an easy task. Whenever I’m asked what I want my reply is always the same ‘more books’. And while buying myself a book is, quite literally, one of the greatest pleasures in life, to my friends, however, it is no mean feat. In their eyes, I’ve read pretty much everything, in my eyes; I’ve barely made a start. They all know who my favourite authors are, but they’re also aware of my slightly unusual habit of buying the same books repeatedly, simply because I love them THAT much.

And so Christmas 2011, and I have a book-shaped present from one of my nearest and dearests –Sian, an actress, who is more of a sister than a friend. And I discard the wrapping paper to find a book that it’s safe to say I would never have bought for myself – Caitlin Moran’s memoir How To Be A Woman. I know Caitlin Moran from her weekly column in The Sunday Times Style magazine, and while I have always enjoyed her writing, indeed found her both witty and compelling, she just isn’t really ‘me’. She’s quite edgy, and cool and a bit of a feminist; of which I am none of the above. However, the reason I began my journey into the BBC’s Big Read was to broaden my reading horizons, so, shortly after Christmas, I decide to give it a go.

Before I begin my review on this book, I should probably start by saying thus: I am the type of person who Caitlin Moran would hate. I am not a feminist. The whole concept of feminism makes me feel a bit uncomfortable. I have a fabulous friend who was so outraged when I said that I would rather have a male Prime Minister that she didn’t speak to me for almost a month. I find women who shout about equal pay and equal rights for both the sexes a bit, well, cringe. I once had a flat mate who post breaking-up with a boyfriend refused to shave her legs for six weeks because it was her ‘right as a woman’ – an idea that horrified me.

But before you start tutting in horror and shaking your heads in disgust, after reading How to be a Woman I can admit my views on feminism were slightly archaic. Part autobiography, part muse, part rant, How To Be A Woman begins on Moran’s 13th Birthday on a council estate in Wolverhampton and follows her through adolescence, marriage, pregnancy and abortion. Written in a humorous, and at times touching, fashion, the common theme throughout is the very blatant disparities between life as a male and life as a female. So gripping and convincing is her writing, that for the first time in twenty-five years, I took an objective look at feminism and realized that being a feminist doesn’t mean you hate men, or that you have to run around burning your bra; it simply means that you believe that we, as women, deserve equality.

About How to be a Woman

Though they have the vote and the Pill and haven’t been burned as witches since 1727, life isn’t exactly a stroll down the catwalk for modern women. They are beset by uncertainties and questions: Why are they supposed to get Brazilians? Why do bras hurt? Why the incessant talk about babies? And do men secretly hate them? Caitlin Moran interweaves provocative observations on women’s lives with laugh-out-loud funny scenes from her own, from adolescence to her development as a writer, wife, and mother.

Caitlin Moran had literally no friends in 1990, and so had plenty of time to write her first novel, The Chronicles of Narmo, at the age of fifteen. At sixteen she joined music weekly, Melody Maker, and at eighteen briefly presented the pop show ‘Naked City’ on Channel 4. Following this precocious start she then put in eighteen solid years as a columnist on The Times – both as a TV critic and also in the most-read part of the paper, the satirical celebrity column ‘Celebrity Watch’ – winning the British Press Awards’ Columnist of The Year award in 2010 and Critic and Interviewer of the Year in 2011. The eldest of eight children, home-educated in a council house in Wolverhampton, Caitlin read lots of books about feminism – mainly in an attempt to be able to prove to her brother, Eddie, that she was scientifically better than him. Caitlin isn’t really her name. She was christened ‘Catherine’. But she saw ‘Caitlin’ in a Jilly Cooper novel when she was 13 and thought it looked exciting. That’s why she pronounces it incorrectly: ‘Catlin’. It causes trouble for everyone.

0 comments on “Review: How to be a Woman – Caitlin Moran”