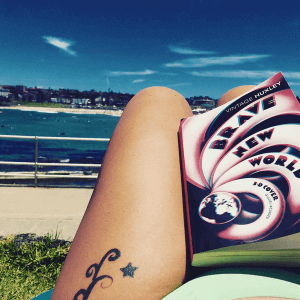 When it came to the final six books I had left to read on the BBC Top 100, Brave New World was the shortest, and thus the easiest one to chose as my next read. While it didn’t sound like the kind of novel I’d usually be interested in, at less than 300 pages its length was certainly more appealing than my other options.

Written in 1931 by Aldous Huxley and published in 1932, Brave New World takes its title from Miranda’s speech in Shakespeare’s The Tempest and is set in London of AD 2540. Brave New World is in essence a portrayal of a utopia (or dystopia, depending how you look at it) in which there is constant prosperity, people are always content, as they are well provided for and have been programmed to like all aspects of society. This programming is undertaken by workers in charge of breeding the future citizens of this idyllic world, which is united under one government, under Ford. As everybody has been programmed to like their class and job, everybody is constantly content and has no wish to do anything other than what is required of them. If they happen to become depressed, of course, there is always the mood altering drug Soma.

Often deemed as one of the most important science fiction novels ever written, it boasts an abundance of satire, futuristic extrapolation, and philosophical discussion; and indeed there’s no doubt that Huxley’s writing style is full of wit. While Brave New World hasn’t been my favourite from the BBC Top 100, the aim of my challenge was to read outside my comfort zone, and I can say that in reading Huxley’s best-known book, I’ve certainly done that.