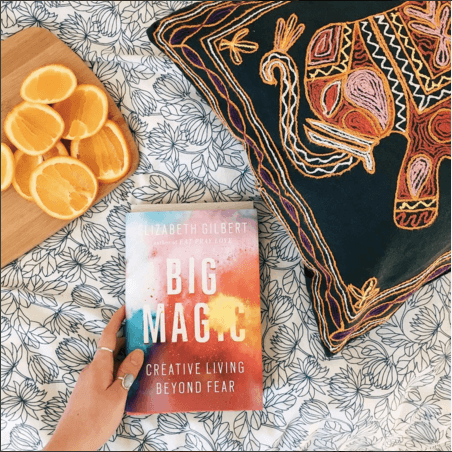 Last night I was lucky enough to attend an event at Sydney’s Seymour Centre with author Elizabeth Gilbert as part of the Sydney Writer’s Festival. Best known for her 2006 memoir Eat, Pray, Love, she is beloved by readers and spiritual seekers the world over, many of whom now see her as a go-to guru for life’s biggest questions.

Her most recent book is the awe-inspiring Big Magic: Creative Living Beyond Fear. An honest discussion and observation of the creative process – whether your forte be watercolours, writing or woodwork – Big Magic strikes a playful and conversation tone; one that Gilbert is a master of – but is ultimately a straight-talking guide to how to hone your creativity and dispel your self-doubt.

Interviewed by Australian writer Rebecca Huntley, the audience was told about the night that a sixteen-year-old Gilbert got down on her knees in a candle-lit room and made a vow to writing. She didn’t vow that she would be a successful writer, nor a great one; she imposed no time limits; she simply vowed that she would spend the rest of her life writing – an art form she described as being both holy and sacred to her as a writer.

As an aspiring writer myself, I listened with interest as she spoke about the two levels of creativity; that of the ego and that of the soul. While the ego is never satisfied, and thus is often the biggest obstacle when unleashing one’s creativity, the soul doesn’t care about reward or failure; it isn’t guided by dreams of praise or fears of criticism. The soul tells you to do something simply because you can’t not.

Gilbert also spoke about choosing curiosity over fear and the importance of not letting the prospect of failure getting in the way of achieving one’s dream, and she advised would-be creatives to not give up; to set a timer and to create for 30 minutes a day; until something happened – it might not happen on the first, tenth or twentieth day, but when it did it would be worth it.

An inspiring, witty and down-to-earth speaker, Gilbert told the audience that when she wrote Eat Pray Love she wrote it for her friend Darcy, and she recommended creating with just one person in mind; saying that when you’re talking to everyone you’re talking to no-one. This is clearly an art form that Gilbert is best at; during the entire event, I felt like I was the only person in the room.