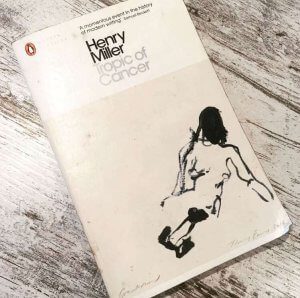 I’ve previously spoken about how in a social environment, I often turn into the biggest of book-bores, seeking recommendations from anyone and everyone, talking about my BBC Big Read challenge (which I finished last month), and, perhaps most cringe-worthy of all, giving random strangers details of my blog, in case they’re ever in need of a good book.

This happened quite recently at a Boxing Day pool-party I went to in Valcluse, but happily I left with a number of recommendations to add to my reading pile. Henry Miller’s debut, Tropic of Cancer was one of them, suggested by my friend Tyler, and I chose it as my second post-BBC Big Read book, following on from The Natural way of Things by Charlotte Wood.

A notorious novel that was banned in the US, the ‘free speech we now take for granted in literature’ has been attributed to its publication in 1934, and it is regarded by many as an import work of 20th century literature. Telling the tale of a young, American writer and the sordid life he leads in bohemian Paris in the 1930s, we witness his encounters with prostitutes, pimps and penniless artists.

Boasting a crude charm and energy throughout, Miller fuses fact and fiction to provide a book whose prose is often wildly self-indulgent offering a pilgrimatic Paris as the backdrop. . Miller depicts Paris as a magical place, a pilgrimage site for artists and wanderers. A meaty read, Tropic of Cancer is an exploration of what it truly means to be happy, and the author shows us that the answer isn’t always as simple as it seems.

RELATED:  Review: The Catcher in the Rye - JD Salinger