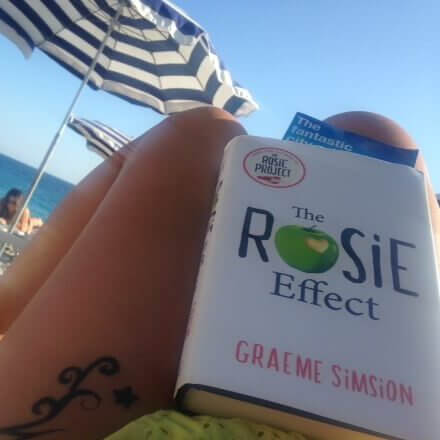 Shortly after reading The Rosie Project when it was published last spring, I was lucky enough to meet Graeme Simsion – whose debut novel had taken the publishing world by storm – at an event on the Southbank. I’m always nervous of meeting authors whose books I enjoy; but Melbourne-based Simsion could not have been nicer. Thus it was with great excitement that I learned he had written The Rosie Effect; a follow up to his much loved first novel.

Perhaps one of the most memorable characters from literature in recent years, The Rosie Project told the tale of socially awkward genetics professor Don Tilman’s quest for a wife, and when we meet him in The Rosie Effect he is ten months and ten days into his marriage to Rosie.

As heartwarming and hilarious as his debut, The Rosie Effect continues the adventures of Don as he deals with some unexpected news from Rosie in as awkward a fashion as we have come to expect. Inept and charming in equal measure, Don’s narration of the story offers a brilliant insight into what happens when a life dictated by order is turned on its axis.

Charming, poignant and an all-round brilliant read, The Rosie Effect is the perfect follow-on to one of 2013’s best books.

About The Rosie Effect

The highly anticipated sequel to the New York Times bestselling novel The Rosie Project, starring the same extraordinary couple now living in New York and unexpectedly expecting their first child. Get ready to fall in love all over again.

Don Tillman and Rosie Jarman are back. The Wife Project is complete, and Don and Rosie are happily married and living in New York. But they’re about to face a new challenge because – surprise – Rosie is pregnant.

Don sets about learning the protocols of becoming a father, but his unusual research style gets him into trouble with the law. Fortunately his best friend Gene is on hand to offer advice: he’s left Claudia and moved in with Don and Rosie.

As Don tries to schedule time for pregnancy research, getting Gene and Claudia to reconcile, servicing the industrial refrigeration unit that occupies half his apartment, helping Dave the Baseball Fan save his business, and staying on the right side of Lydia the social worker, he almost misses the biggest problem of all: he might lose Rosie when she needs him the most.

Graeme Simsion first introduced these unforgettable characters in The Rosie Project, which NPR called “sparkling entertainment along the lines of Where’d You Go Bernadette and When Harry Met Sally.” The San Francisco Chronicle said, “sometimes you just need a smart love story that will make anyone, man or woman, laugh out loud.” If you were swept away by the book that’s captivated a million readers worldwide, you will love The Rosie Effect.

Graeme Simsion is a former IT consultant and the author of two nonfiction books on database design who decided, at the age of fifty, to turn his hand to fiction. His first novel, The Rosie Project, was published in 2013 and translation rights have been sold in forty languages. Movie rights have been optioned to Sony Pictures. The sequel, The Rosie Effect, is also a bestseller, with total sales of the two novels approaching five million.