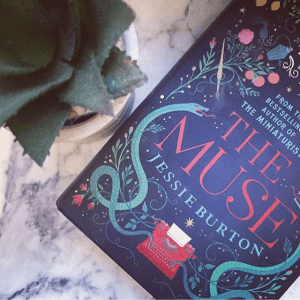 After a recent trip back to London, which involved sorting through hundreds of books that had been packed away in every available nook and cranny of my mum and step-dad’s cottage, I was left with the arduous task of which books to give away, which to leave in storage, and which should come back to Sydney with me. Having filled six bin liners with books when I moved out of my London flat to set sail for Sydney, it was no mean feat, and with limited space in my suitcase traveling back to Australia, I had to be ruthless when it came to choosing which books were to accompany my journey.

Jessie Burton’s The Muse was one of the select few that made the cut. Having won a legion of fans with her debut, The Miniaturist, I was intrigued to see how The Muse would compare, and with the prettiest cover I ever did see, it seemed a shame to leave it stored away.

Much like The Miniaturist, The Muse enthrals its reader from the opening page. Set between two timezones, it tells the tale of Caribbean immigrant Odelle who works at an art gallery in 1960s London, and bohemian Olive, the daughter of an art dealer living in war-torn Spain in the 1930s, whose lives become intertwined thanks to a painting whose origin is steeped in mystery.

Burton weaves an intricate tapestry of secrets as the story unfolds and creates a cast of colourful characters whose lives the reader quickly becomes invested in. Captivating and compelling, The Muse is a vivid tale of desire and betrayal set against a richly colourful palette of war, death, dishonesty and deceit. Beautifully imagined and a page-turner of the finest sort, I have no doubt that Burton’s newest novel will be welcomed with open arms by the wealth of readers awaiting her return.