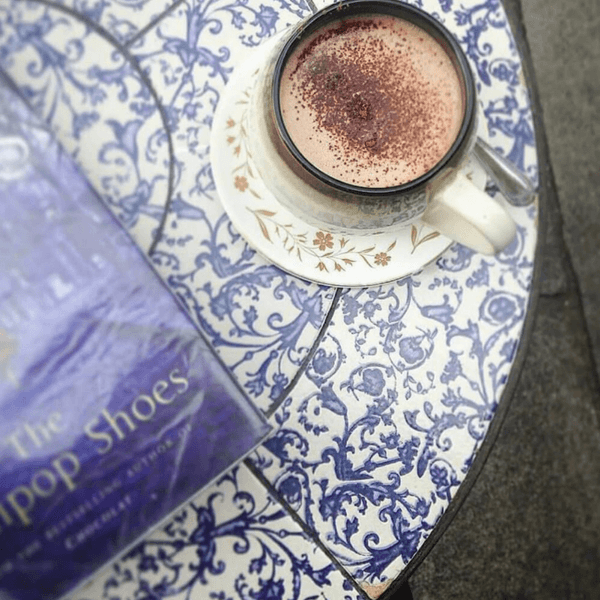 Following my trip to Paris and in anticipation of Joanne Harris’s forthcoming novel, Peaches for Monsieur le Cure, I decided to re-read The Lollipop Shoes, the follow-up to Harris’s wonderful Chocolat. As with all of Harris’s novels, I was immediately swept away into a world of chocolate and magic, set in the midst of the Parisian fog.

The Lollipop Shoes revisits free spirit Vianne five years after she blew into the French village of Lansquenet; tempting the God-fearing townsfolk with her alluring Chocolaterie. In The Lollipop Shoes, Vianne and her two daughters Anouk and Rosette, are now running a Chocolaterie located on a cobbled street of Montmatre; the last village in Paris. The book opens on the night of Halowe’en with a woman who steals the identities of the dead. This time she has cast herself as Zozie de l’Alba, a suspiciously charming woman who sees in Anouk the simmering powers of a child on the edge of adulthood and rebellion.

Unlike in Chocolat, The Lollipop Shoes sees a more vulnerable side to Vianne; tired of having spent years moving with the wind she is now trying to conform in the hope of providing both her daughters with a stable and safe home. And thus arises the perfect opportunity for Zozie to breeze into their lives, bringing with her a dark and dangerous magic.

The occult undertones that simmered throughout Chocolat are more of a prominent feature in The Lollipop Shoes, and we witness both Anouk and Rosette’s supernatural powers developing. As the plot develops, it becomes clear that there is more to Zozie than meets the eye, and thus follows a tantalising tale of good against evil. Intricately woven alongside this dark fairytale of a Parisian Chocolaterie is a cast of thoughtfully layered characters, whose idiosyncracies and charm form a similar backdrop to the book, much like in Chocolat.

A spell-binding novel with a compelling plot, Harris writes with her trade mark poetic flair and beautifully descriptive prose. With the perfect measures of magic, mystery and temptation, The Lollipop Shoes is a delicious treat for all its readers.

About The Lollipop Shoes

The wind has always dictated Vianne Rocher’s every move, buffeting her from the French village of Lansquenet-sous-Tannes to the crowded streets of Paris. Cloaked in a new identity, that of widow Yanne Charbonneau, she opens a chocolaterie on a small Montmartre street, determined to still the wind at last and keep her daughters, Anouk and baby Rosette, safe. But the weather vane soon turns, and Zozie de l’Alba blows into their lives. Charming and enigmatic, Zozie provides the brightness that Yanne’s life needs–as her vivacity and bold lollipop shoes dazzle rebellious and impressionable preadolescent Anouk. But beneath their new friend’s benevolent facade lies a ruthless treachery–for devious, seductive Zozie has plans that will shake their world to pieces.TLT