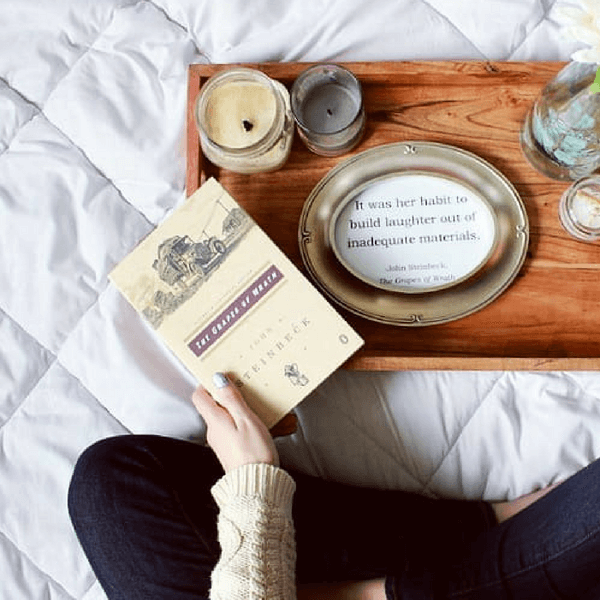 My copy of John Steinbeck’s The Grapes of Wrath had no blurb nor a summary of the plot; thus when I began I had little idea of what to expect. However, Of Mice and Men is one of my favourite books, and a great friend of mine, Laura, has always highly recommended East of Eden so I certainly anticipated a good read; particularly with its placing at number 29 in the BBC Big Read.

Published in 1939, The Grapes of Wrath won the annual National Book Award and the Pulitzer Prize; certainly it contributed towards John Steinbeck’s Nobel Prize in 1962. There are clear similarities between The Grapes of Wrath and his earlier, and perhaps most famous, novel, Of Mice and Men, both of which carry a social context and include themes of the American Dream, and a struggle against the odds.

Set against a backdrop of The Great Depression, The Grapes of Wrath follows the fortunes of the Joad family, tenant farmers in Oklahoma who migrate West to California in search of a better life. Largely affected by the Dust Bowl, a side effect of the drought of the 1930s which saw severe dust storms causing massive damage to much American land, the Joads, along with thousands of other Oklahoma natives, sought the abundance of opportunities that sunny California had to offer.

However, it soon became clear that the American Dream the Joads are chasing is not as straightforward as they first thought; jobs are scarce, competition is fierce and wages are low. And thus: a tale of one family’s agonizing battle against poverty as they seek jobs, land, dignity and a future.

The historical context against which The Grapes of Wrath was set gives Steinbeck the opportunity to explore a number of issues, unemployment being one of the most prominent. And despite being written over seventy years ago, such a theme is as relevant now as it was then; albeit in very different circumstances.

The Grapes of Wrath is a harrowing tale with a haunting conclusion that certainly does not make for easy reading. The quest for survival that dominates the text and the sacrifices made therein are thought-provoking and stay with the reader long after the last page. Steinbeck’s prose is beautifully descriptive, and his frequent use of phonetic spelling gives the characters an almost tangible voice throughout the text.

A human, majestic and moral tale, Steinbeck writes eloquently of endurance, tragedy and suffering, leaving the reader in no doubt of his enormous talents. The Grapes of Wrath is a truly heart-breaking book, and one that certainly deserves its ranking on the BBC’s Big Read.

About The Grapes of Wrath

First published in 1939, Steinbeck’s Pulitzer Prize winning epic of the Great Depression chronicles the Dust Bowl migration of the 1930s and tells the story of one Oklahoma farm family, the Joads, driven from their homestead and forced to travel west to the promised land of California. Out of their trials and their repeated collisions against the hard realities of an America divided into haves and have-nots evolves a drama that is intensely human yet majestic in its scale and moral vision, elemental yet plainspoken, tragic but ultimately stirring in its human dignity.

A portrait of the conflict between the powerful and the powerless, of one man’s fierce reaction to injustice, and of one woman’s stoical strength, the novel captures the horrors of the Great Depression and probes the very nature of equality and justice in America.

Sensitive to fascist and communist criticism, Steinbeck insisted that “The Battle Hymn of the Republic” be printed in its entirety in the first edition of the book—which takes its title from the first verse: He is trampling out the vintage where the grapes of wrath are stored.” As Don DeLillo has claimed, Steinbeck shaped a geography of conscience” with this novel where there is something at stake in every sentence.” Beyond that—for emotional urgency, evocative power, sustained impact, prophetic reach, and continued controversy—The Grapes of Wrath is perhaps the most American of American classics.

John Ernst Steinbeck, Jr. was an American author. He won the 1962 Nobel Prize in Literature “for his realistic and imaginative writings, combining as they do sympathetic humour and keen social perception”.

I’m Lucy, an award-winning book blogger, bibliotherapist and writer with a passion for brilliant books, independent bookstores, literary travel and book festivals around the world.

Here you’ll find weekly book reviews, write-ups on beautiful bookstores from around the world, literary city guides and some personal insights into the agony and ecstasy of life of an expat, all written lovingly from my beach-side bedroom in Bondi.