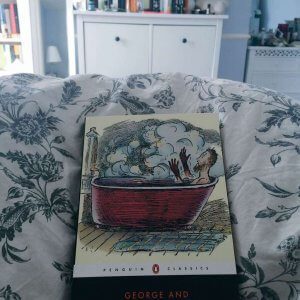 Almost a year ago now, my cousin’s cousin Athel, with whom I spend Christmas in Yorkshire, asked if I would be interesting in joining a book club he was setting up. Soon after, the Beaufort Mansions Book Club was born, launching with Alone in Berlin, before moving onto Great Expectations and then most recently The Diary of a Nobody by brothers George and Weedon Grossmith. Given that it dawned on me two days before our rendevouz that I was yet to even begin the novel, I was rather relieved to discover it was only a couple of hundred pages long, and an incredibly quick read.

Originally serialised in Punch Magazine in the late 19th century, The Diary of a Nobody is an account of clerical worker Mr Pooter, a man of no importance nor interest, his wife Carrie, and their son Lupin. Pretentious and pompous, yet endearing none-the-less, Pooter’s diary is a series of amusing, middle-class anecdotes centred around his family and friends and his never-ending quest to keep up appearances.

The characterisation within the tale is brilliant, and the cast of characters help develop Pooter as a narrator, from his son Willie who changes his name to Lupin believing his real name to be too common, his long-suffering wife Carrie, and his two friends Gowing and Cummins.

Despite having been written in the late nineteenth century, The Diary of a Nobody remains a relevant read over a century after its first publication. Charming, witty and uplifting the novel is a perfect example of how the banalities of everyday life can be weaved into something quite special.