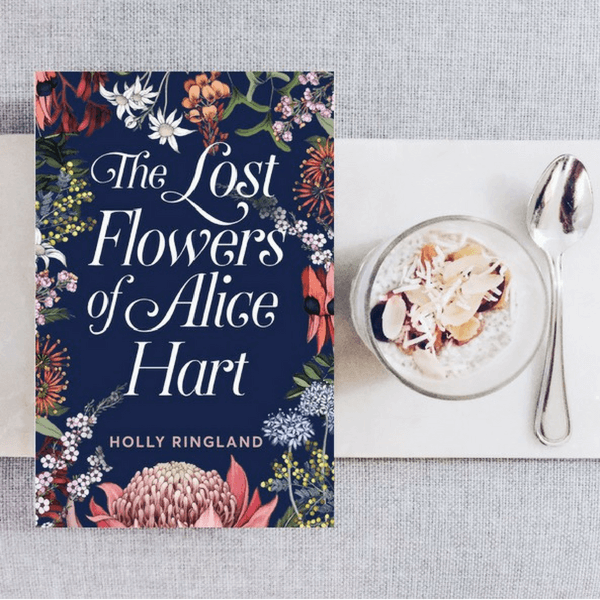 I received a copy of The Lost Flowers of Alice Hart by Holly Ringland as part of the Luxuread subscription box I signed up for earlier in June.  It came with organic tea bags, and Belgium chocolates and bath salts, and so, when a storm swept its way across Sydney earlier last week, and brought with it looming skies and clattering rain, I used it as the perfect excuse to cosy up indoors with some uninterrupted reading time.

A story about fires and flowers and family ties, The Lost Flowers of Alice Hart is a compelling tale from its very first page, where we meet nine-year-old protagonist, Alice Hart, sitting at her desk and dreaming of ways in which she can set her father on fire. She lives an isolated life by the sea with her gentle mother, who talks to the flowers in her garden, and a violent, overbearing father who casts a spell of terror and fear over both his wife and daughter. When catastrophe visits the Hart family, Alice is taken inland to live with the grandmother she never knew she had, at Thornfield, a native flower farm. There Alice slowly comes to terms with her grief, and June vows not to make the same mistakes raising Alice, as she did raising her son – Alice’s father.

As the years pass at Thornfield, Alice embraces life at the flower farm, where she has learnt the language of native flowers just like all the women in her family that came before her. And then, on the night of a devastating storm, Alice uncovers a familial betrayal that she cannot forgive, and so abandons her life at Thornfield and flees to the central Australian desert. There she adopts a puppy, finds work as a national park ranger and immerses herself in a very different way of life to that which came before, but one in which she finally believes she’s found long and lasting happiness.

An enchanting read that explores theme of abuse, death and redemption that orbits against a backdrop of native Australian wildlife, The Lost Flowers of Alice Hart has all the ingredients for a spellbinding tale; and absorbs its reader until the very final page.

About The Lost Flowers of Alice Hart

After her family suffers a tragedy, nine-year-old Alice Hart is forced to leave her idyllic seaside home. She is taken in by her grandmother, June, a flower farmer who raises Alice on the language of Australian native flowers, a way to say the things that are too hard to speak.

Under the watchful eye of June and the women who run the farm, Alice settles, but grows up increasingly frustrated by how little she knows of her family’s story. In her early twenties, Alice’s life is thrown into upheaval again when she suffers devastating betrayal and loss. Desperate to outrun grief, Alice flees to the dramatically beautiful central Australian desert. In this otherworldly landscape Alice thinks she has found solace, until she meets a charismatic and ultimately dangerous man.

Spanning two decades, set between sugar cane fields by the sea, a native Australian flower farm, and a celestial crater in the central desert, The Lost Flowers of Alice Hart follows Alice’s unforgettable journey, as she learns that the most powerful story she will ever possess is her own.

Holly Ringland grew up wild and barefoot in her mother’s tropical garden in Northern Australia. When she was nine years old, her family lived in a camper van for two years in North America,travelling from one national park to another, an experience that sparked Holly’s lifelong interest in cultures and stories. In her twenties, Holly worked for four years in a remote Indigenous community in the central Australian desert. She moved to England in 2009 and obtained her MA in Creative Writing from the University of Manchester in 2011. She now lives between the UK and Australia. Holly’s essays and short fiction have been published in various anthologies and literary journals. In 2015, the first chapter of The Lost Flowers of Alice Hart won Griffith Review’s annual writer award, which included a week-long fellowship at Varuna House, Australia’s top national writing residency.