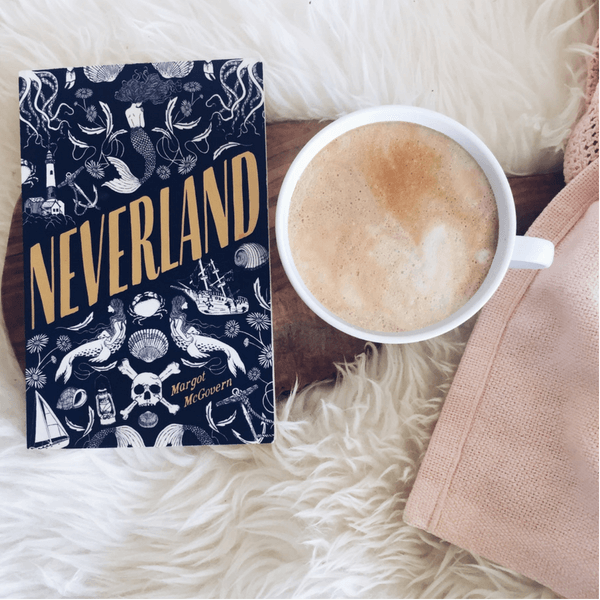 I’ve been a big fan of Margot and her brilliant book blog, Lectito, ever since we first met on Instagram just over two years ago, and so it was with great delight that I found out that in addition to running one of my very favourite book blogs, she too had written a YA novel, that was to be published by Random House Australia. Inspired by a re-reading of J M Barrie’s Peter and Wendy when Margot was living interstate and feeling somewhat stuck, what followed was the creation of what her agent called ‘a subversive twist on the boarding school sub-genre.’ And as a fan of anything set in a boarding school (stemmed from my love of Mallory Towers as a child), I couldn’t wait to get my hands on a copy.

Due to a last minute trip back to London and various other life events that have resulted in a towering pile of unread books, I’ve only recently got around to reading Neverland – but having just finished Margot’s sparkling debut, I can say without doubt that it was definitely worth the wait.

The ultimate in escapism, Neverland combines the very best ingredients for a captivating tale that will sweep its readers away to the shores of a dream-like island. We meet protagonist, seventeen-year-old Kit, who, after an unsuccessful suicide attempt,  returns to the island on which she grew up. While Kit’s memories of the island are magical ones; home to the world in which her dad wrote about in his bestselling and semi-autobiographical novel, Kingdom by the Sea, her life has been anything but a fairytale. After the death of her parents when she was just ten, her psychiatrist uncle Doc turned the island into a boarding school for mentally ill teens, while Kit was shipped off to the mainland.

When she returns, the island is not as she remembered it, and she must face her troubled past, battle her inner demons and try desperately to make sense of the the untimely death of her parents.

A wonderful fusion of fairytales and folklore with a dark and mysterious undertone, Neverland is a brilliant book about grief, nostalgia and recovery, that is both enchanting and raw in equal measure. An atmospheric and beautifully crafted tale for fans of YA and beyond, it’s the perfect book to read if you’re after some serious escapism with a sprinkle of magic.

When she was twelve, Kit Learmonth watched her parents drown in a storm as their boat sailed over the Tranter Sink Hole. Now seventeen, Kit doesn’t remember the incident, and she doesn’t want to. In fact, her only clear memories from before her parents’ death are of the fantastical stories of pirates and mermaids that she and her dad invented about the small island where she grew up, a place she calls Neverland.

Following Kit’s parents’ deaths, her uncle and guardian, Doc, transformed the island into a boarding school for mentally ill teenagers and sent Kit away to school on the mainland. But when Kit tries and fails to end her life, Doc brings her home to the island and places her in the care of his colleague, Dr Hannah Ward.

Resisting her treatment, Kit instead pulls her friends deeper into her world of make-believe. It’s only when Kit and her new boyfriend, Rohan, take the fantasy too far and land themselves in very real danger that her faith in Neverland is shaken, and Kit must find a way back to reality.

Margot McGovern is an Adelaide-based writer who holds a Ph.D. from Flinders University. She has reviewed for several Australian literary journals and blogs at Project Lectito.