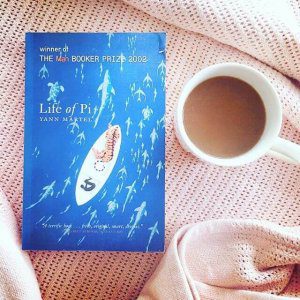 Life of Pi is one of those books that’s been on my radar for a number of years now. Having won the Man Booker Prize in 2002 and been recommended to me by multiple friends I certainly didn’t mean to wait over a decade since its publication to read it – but alas, as with many book bloggers, my to-be-read pile is ever growing and it only recently made it to the top.

A tale that fuses fantasy with adventure, Life of Pi tells the story of Pi, a Tamil boy from Pondicherry, whose family decide to sell their zoo in India to move overseas. Following an ill-fated shipwreck, Pi goes onto incredulously survive 227 stranded onboard a boat with a Bengal tiger called Richard Parker.

A multi-layered novel whose protagonist is spiritual even before facing unsurmountable odds as he battles to survive, early on in the story we witness Pi – who’s born a Hindu – encounter Christianity and Islam and become a worshipper of the three traditions.

Much of the story that follows the shipwreck is as much about our unwavering survival instinct as it is about the mystery of the wilderness and the vast unknown. The author’s melodic prose illustrates a barren yet beautiful landscape and Pi suffers at the hands of Mother Nature, misfortune and at the hands of his mind.

Poetic, lyrical and beautifully written, Life of Pi is a thought-provoking tale that speaks to readers the world over. A coming of age novel at its core, we witness the self-discovery and spiritual journey of the protagonist as he survives against the odds. Abundant with themes of both spirituality and religion, self-perception, the importance of family, and the nature of animals, Life of Pi is a rich tale of morality, faith, and the fine line between fact and fiction.