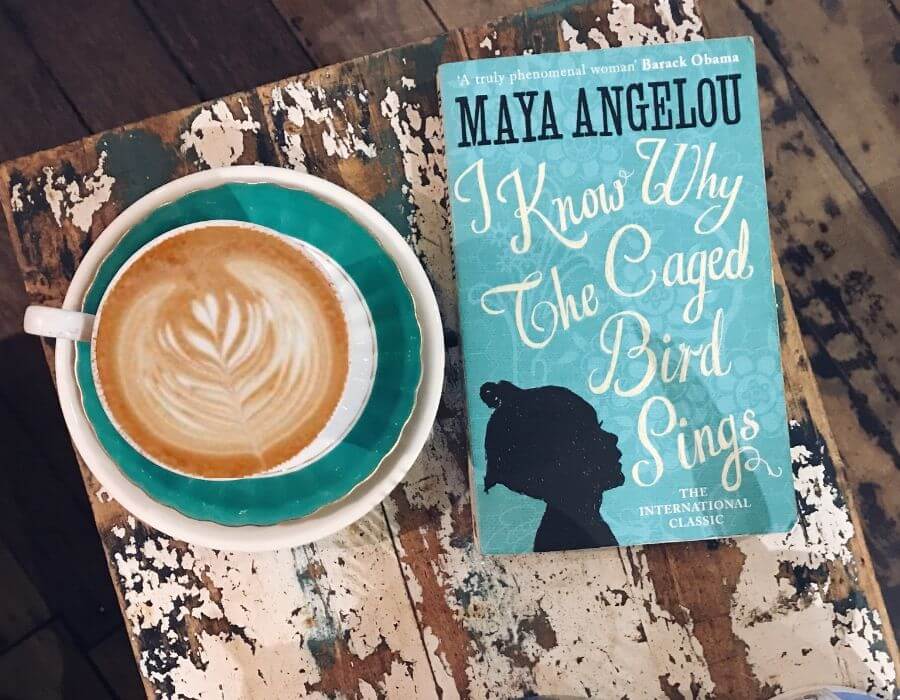 How I managed to get to the ripe old age of 33 without reading any of Maya Angelou’s work is entirely beyond me, especially given that I wrote my university dissertation on black women writers. And yet, it was only when I was at a loose end recently and perusing the shelves of Gertrude & Alice, that I decided to finally tick this much-loved memoir off my ever-expanding reading wish-list.

As someone who has long been lauded as one of the most important voices of the 21st century, Maya Angelou is as well known for her activism as she was for her writing. The first in a six-strong series of autobiographies, I Know Why the Caged Bird Sings is a depiction of Angelou’s life as a young girl in Stamps, Arkansas.  A tome that frequently features on banned book lists, I Know Why the Cage Bird Sings addresses issues of rape, racism and molestation, all of which Angelou was privy to during her adolescence and younger years.

Born Marguerite Johnson and often referred to as Ritie by her relatives, we learn about Angelou’s childhood in rural Arkansas where Maya and her older brother Bailey were taken to live with their grandmother following their parents’ divorce. Despite the fact that the south was still in the throes of racial prejudice and Stamps was at the forefront of the segregation, the young Maya Angelou appeared to enjoy a loving childhood. Raised by a strict, church going grandmother and uncle, Maya and Bailey turned to both books for comfort, a passion which saw both children quickly advance through the Stamps educational system, two grades ahead of schedule.

What follows is a life littered with trials and tribulations as Angelou navigates everything from sexual abuse to academic excellence. A gifted author and poet who was advanced well beyond her years as a child, Angelou delivers a poignant memoir, rich with prose set against the backdrop of rural and racist America. A moving portrait of a childhood in the midst of the Jim Crow laws, I Know Why the Caged Bird Sings reveals the upbringing of a remarkable American woman. A courageous glimpse into Angelou’s life, this first memoir of hers is poetic and powerful, and the ultimate portrayal of triumph in the face of adversity.

About I Know Why the Caged Bird Sings

Maya Angelou’s debut memoir has become an classic beloved worldwide. Her six volumes of autobiography are a testament to the her talents and resilience.. Loving the world, she also knows its cruelty. As a Black woman she has known discrimination and extreme poverty, but also hope, joy, achievement and celebration. In this first volume of her six books of autobiography, Maya Angelou beautifully evokes her childhood with her grandmother in the American south of the 1930s. She learns the power of the white folks at the other end of town and suffers the terrible trauma of rape by her mother’s lover. However, far from being dispiriting, James Baldwin writes, ‘I Know Why the Caged Bird Sings liberates the reader into life simply because Maya Angelou confronts her own life with such a moving wonder, such a luminous dignity.’

‘I write about being a Black American woman, however, I am always talking about what it’s like to be a human being. This is how we are, what makes us laugh, and this is how we fall and how we somehow, amazingly, stand up again’ Maya Angelou

Dr Maya Angelou was one of the world’s most important writers and activists. Born 4 April 1928, she lived and chronicled an extraordinary life: rising from poverty, violence and racism, she became a renowned author, poet, playwright, civil rights’ activist – working with Malcolm X and Martin Luther King – and memoirist. She wrote and performed a poem, ‘On the Pulse of Morning’, for President Clinton on his inauguration; she was given the Presidential Medal of Freedom by President Obama and was honoured by more than seventy universities throughout the world.

She first thrilled the world with I Know Why the Caged Bird Sings (1969). This was followed by six volumes of autobiography, the seventh and final volume, Mom & Me & Mom, published in 2013. She wrote three collections of essays; many volumes of poetry, including His Day is Done, a tribute to Nelson Mandela; and two cookbooks. She had a lifetime appointment as Reynolds Professor of American Studies at Wake Forest University of North Carolina. Dr Angelou died on 28 May 2014.