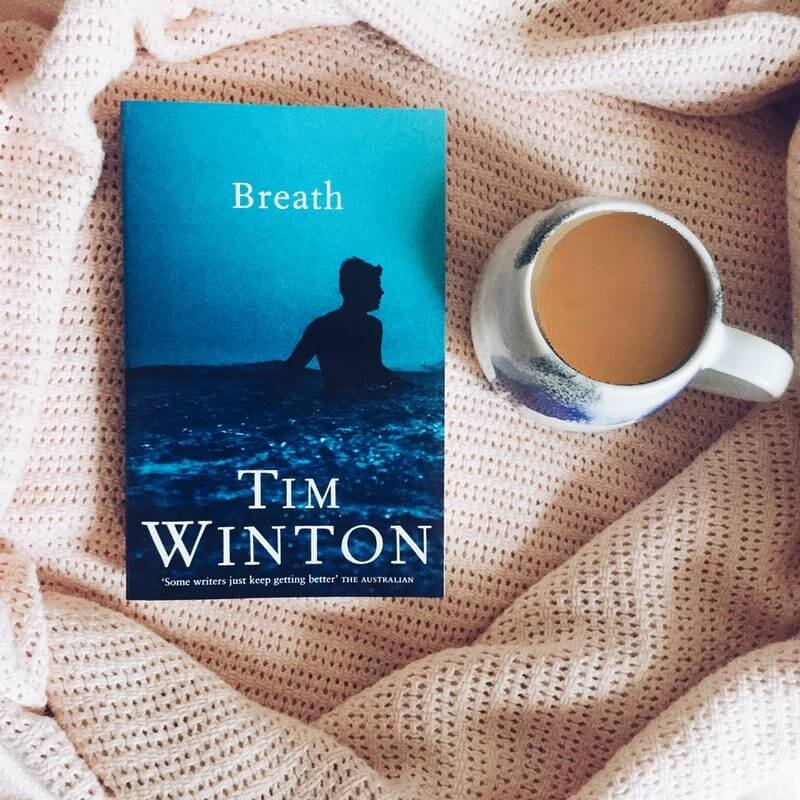 I’ve been meaning to read Tim Winton ever since I moved to Australia two and a half years ago. Beloved by readers all over the world, he’s something of an Australian treasure, with an impressive back catalogue of books, many of which have been shortlisted for – or won – prestigious literary prizes, including the Miles Franklin and the Man Booker.

I have a dog-eared and dusty copy of Cloud Street that I bought from a book shop in a small village skirting the Blue Mountains when I visited with my mum and step-dad last year; I also have in my possession his much lauded Dirt Music which I purchased during one of my prolonged trips to Paddington’s Berkelouw Books.

And yet, it wasn’t until a recent trip to Byron and a literary shopping spree at The Book Room at Byron that I bought myself a copy of Breath. And it was on seeing said book’s trailer for the soon-to-be-released film adaptation that I swiftly moved Tim Winton’s tale right to the top of my reading pile.

A coming of age story about water, surfing and survival, Breath entices its reader from the very first page. We meet Bruce, a paramedic, who is called to attend the death of a teenager; an incident which causes him to reflect on a pivotal point in his own life: the summer when he surfed Old Smoky, the biggest, most dangerous wave on the Point, dodged a shark, fell in love, and found and lost friendship. The book looks back on his own tumultuous teenage years in a small mill town in Western Australia, many of which were spent in the water with his friend Loonie. It’s while surfing that the boys meet Sando; older and more worldly, he soon takes them under his wing, and teaches them to live life precariously and on the edge. The boys develop an obsession with the has-been 70’s surfing guru and his angry, bitter young wife, and the tale follows the four characters across one hot summer of surfing.

A story about breath, adolescence and risk-taking, it too is a tale about life in a small town, testing the boundaries of friendship and our ability to seek gratification by selfishly exploiting circumstance. Winton writes about the relentless restlessness of ambition and the illusion of achievement; the elation of success alongside the disillusioning devastation of failure.

Deceptively complex, with mesmerising storytelling and lyrical prose, Breath is subtle and sleek and poignant and powerful. You can smell the sea salt air, feel the sun cooked skin and the crunch of sand beneath your feet as you read and will savour every last page.

Tim Winton has published twenty-nine books for adults and children, and his work has been translated into twenty-eight languages. Since his first novel, An Open Swimmer, won the Australian Vogel Award in 1981, he has won the Miles Franklin Award four times (for Shallows, Cloudstreet, Dirt Music and Breath) and twice been shortlisted for the Booker Prize (for The Riders and Dirt Music). He lives in Western Australia.

Tim Winton is Australia’s best-loved novelist and Breath, is an extraordinary evocation of an adolescence spent resisting complacency, testing one’s limits against nature, finding like-minded souls, and discovering just how far one breath will take you. It’s a story of extremes—extreme sports and extreme emotions.

On the wild, lonely coast of Western Australia, two thrillseeking and barely adolescent boys fall into the enigmatic thrall of veteran big-wave surfer Sando. Together they form an odd but elite trio. The grown man initiates the boys into a kind of Spartan ethos, a regimen of risk and challenge, where they test themselves in storm swells on remote and shark-infested reefs, pushing each other to the edges of endurance, courage, and sanity. But where is all this heading? Why is their mentor’s past such forbidden territory? And what can explain his American wife’s peculiar behavior? Venturing beyond all limits—in relationships, in physical challenge, and in sexual behavior—there is a point where oblivion is the only outcome. Full of Winton’s lyrical genius for conveying physical sensation, Breath is a rich and atmospheric coming-of-age tale from one of world literature’s finest storytellers.

Readings review of Breath is well worth a read.

This is a great interview with Tim Winton.

Fan of all things water related? here are some of the best gifts for surfers.