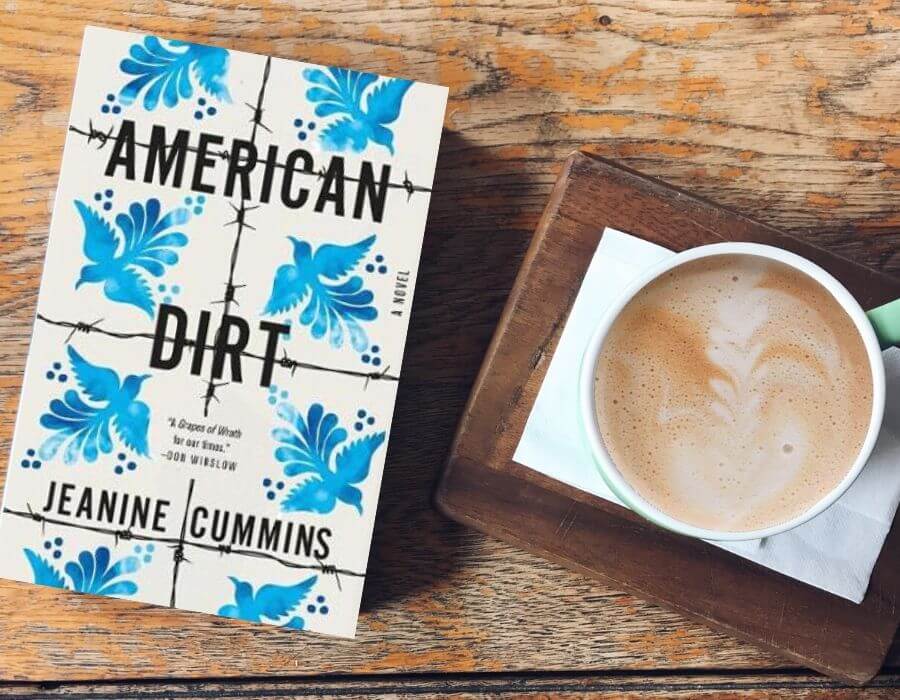 I had planned to write my review of American Dirt by Jeanine Cummins the day after I finished it. But to begin with, I was swept up in such a state of sadness that I couldn’t quite find the words I needed to write about it as eloquently as I would have liked, and then I found myself down something of a Google rabbit hole as I read, watched and listened to all the controversy surrounding it; something I will touch on later in this review.

I was lent a copy by my friend Jane, who owns Gertrude & Alice; both her and her daughter Kate had read it, and I took it with me to Byron Bay over Australia Day weekend, with plans to start it if – and when – I finished the book I was reading at the time. Alas, I accidentally left said book in the airport, and so started American Dirt shortly after take off.

The book’s opening – in which we meet Lydia and her son Luca, cowering in the bathtub of her mother’s bathroom as sixteen members of their family are gunned down outside – sets both the tone and the pace for the rest of American Dirt, a book that I read with a sense of looming horror and despair over two single sittings. What follows is a powerful portrayal of the of the plight of the migrant, as we witness an innocent mother and her young son desperately – and illegally – attempt to enter the US from Mexico, while fleeing from the cartel who assassinated their family. The grief, the fear, the risks they were forced to take to save both their loved ones and themselves was paramount to the novel; so too was the savagery of the cartel in the pursuit of their victims. At its heart, this is a novel about love and sacrifice and privilege and fear. And while no one is to be trusted, amid much cold-blooded barbarity and those out to make quick buck at the expense of the downtrodden, there are good souls along the way who provide food, water, and shelter to the migrants.

For the last quarter of the American Dirt I could barely draw a breath, but at the same time I didn’t want it to end. I genuinely can’t remember the last time I felt this shaken up, broken and bruised by a book (as anyone who saw me crying in Bondi as I raced through the final pages can attest to). There has been much, much controversy surrounding American Dirt. But, for what it’s worth, here is my take. For me one of the reasons I read is to educate myself, to foster greater empathy for others, and to learn more about cultures I otherwise might not, and I believe that American Dirt has given me a greater understanding of what others are going through. It has given life to faces I only ever see on the news, and a voice to the untold stories of many. Utterly harrowing, heartbreaking, hauntingly beautiful. I don’t think I’ll ever stop thinking about this book.

También de este lado hay sueños. On this side, too, there are dreams.

Lydia Quixano Pérez lives in the Mexican city of Acapulco. She runs a bookstore. She has a son, Luca, the love of her life, and a wonderful husband who is a journalist. And while there are cracks beginning to show in Acapulco because of the drug cartels, her life is, by and large, fairly comfortable.

Even though she knows they’ll never sell, Lydia stocks some of her all-time favorite books in her store. And then one day a man enters the shop to browse and comes up to the register with a few books he would like to buy—two of them her favorites. Javier is erudite. He is charming. And, unbeknownst to Lydia, he is the jefe of the newest drug cartel that has gruesomely taken over the city. When Lydia’s husband’s tell-all profile of Javier is published, none of their lives will ever be the same.

Forced to flee, Lydia and eight-year-old Luca soon find themselves miles and worlds away from their comfortable middle-class existence. Instantly transformed into migrants, Lydia and Luca ride la bestia—trains that make their way north toward the United States, which is the only place Javier’s reach doesn’t extend. As they join the countless people trying to reach el norte, Lydia soon sees that everyone is running from something. But what exactly are they running to?

American Dirt will leave readers utterly changed. It is a literary achievement filled with poignancy, drama, and humanity on every page. It is one of the most important books for our times

Jeanine Cummins is the author of four books: the bestselling memoir A Rip in Heaven, and the novels The Outside Boy, The Crooked Branch, and American Dirt. She lives in New York with her husband and two children.

‘As American Dirt racks up sales, its author becomes the story‘, from The New York Times is a brilliant read. The problems with Jeanine Cummins and American Dirt from The Sydney Morning Herald. Oprah Winfrey breaks silence on American Dirt controversy.