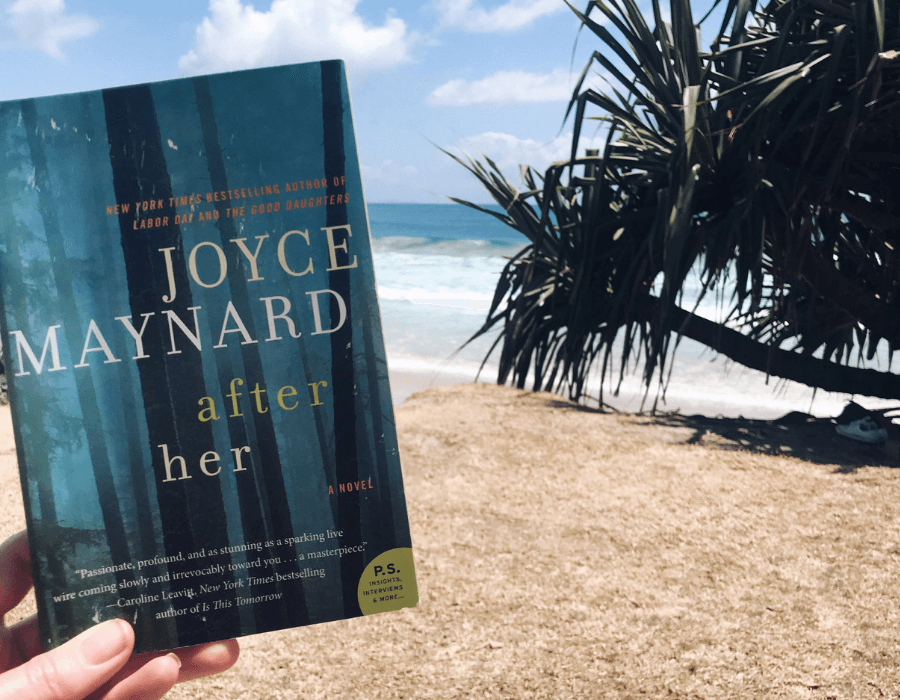 I’ve been a huge fan of Joyce Maynard’s ever since I read Labour Day many moons ago. I then went on to read – and adore – her heartbreaking memoir The Best of Us when I was living in LA with my boyfriend; who then bought me a copy of Under the Influence during our anniversary weekend in Laguna Beach. There’s not been a book of hers that I haven’t raced though, though even I surprised myself by reading After Her in just two sittings.

Loosely based on the Trailside Killer Case (which I read about at length prior to beginning the book) After Her is the story of young girl Rachel and her unwavering adoration for her father, who is the lead detective on a serial murder case that has swept across the mountain range behind their family home.

The book begins during a dry hot summer in Northern California when sisters Rachel and Patty have the stretch of school vacation ahead of them. The daughters of a charismatic and irresistible detective and a depressed mother, they spend their days playing on the mountain onto which their family home backs until young women start appearing dead on the well-trodden hiking trails.

What follows is the coming of age story of Rachel and her younger sister Patty, in the late 70’s and early 80’s California. After their father cheats of their mother and the marriage consequently dissolves, Maynard brilliantly depicts how the two young girls adjust to growing up in a broken home, poor, and with a largely absent father, who they both continue to idolize. Unable to afford cable, the sisters instead watch TV by sitting outside their neighbours houses, in the yard, watching the Brady Bunch, through the window, and adding their own dialogue.

And yet while the girls are occupied with their own impending adolescence and the intricacies of  school and friendships and boys or lack thereof, a serial killer starts hunting his prey on the mountain behind their house. Known as The Sunset Strangler, when the murders first begin to happen, their father is the lead homicide detective on the case, and viewed by many as something as a hero. Rachel soon capitalizes on the new-found popularity that comes with being the daughter of the handsome detective in charge of such an important case.  But, with the discovery of more and more victims, and still no signs of a suspect, both Rachel’s popularity at school and the respect the community have for her father begin to dwindle quite rapidly. And with her father’s job and reputation in limbo, Rachel is desperate to help the man she adores most in the world, and so hatches an elaborate plan to help find the killer, putting herself in the direct path of the killer.

A gripping read that is a love story between sisters, and between fathers and daughters, After Her is a page turning and nostalgic book about love, loneliness and obsession, and how the toxic combination of all three can have devastating effects on everyone involved.

I was always looking for excitement, until I found some . . .

Summer, 1979. A dry, hot Northern California school vacation stretches before Rachel and her younger sister, Patty—the daughters of a larger-than-life, irresistibly handsome (and chronically unfaithful) detective father and the mother whose heart he broke.

When we first meet her, Patty is eleven—a gangly kid who loves basketball and dogs and would do anything for her older sister, Rachel. Rachel is obsessed with making up stories and believes she possesses the gift of knowing what’s in the minds of people around her. She has visions, whether she wants to or not. Left to their own devices, the sisters spend their days studying record jackets, concocting elaborate fantasies about the mysterious neighbor who moved in down the street, and playing dangerous games on the mountain that looms behind their house.

When young women start turning up dead on the mountain, the girls’ father is put in charge of finding the murderer known as the “Sunset Strangler.” Watching her father’s life slowly unravel as months pass and more women are killed, Rachel embarks on her most dangerous game yet . . . using herself as bait to catch the killer. But rather than cracking the case, the consequences of Rachel’s actions will destroy her father’s career and alter forever the lives of everyone she loves.

Thirty years later, still haunted by the belief that the killer remains at large, Rachel constructs a new strategy to smoke out the Sunset Strangler and vindicate her father—a plan that unexpectedly unearths a long-buried family secret.

Loosely inspired by the Trailside Killer case that terrorized Marin County, California, in the late 1970s, After Her is part thriller, part love story. Maynard has created a poignant, suspenseful, and painfully real family saga that traces a young girl’s first explorations of sexuality, the loss of innocence, the bond shared by sisters, and the tender but damaged relationship between a girl and her father that endures even beyond the grave.

Joyce Maynard is the author of eight previous novels, including To Die For, Labor Day, The Good Daughters, and four books of nonfiction. Her bestselling memoir, At Home in the World, has been translated into sixteen languages. She lives in California.