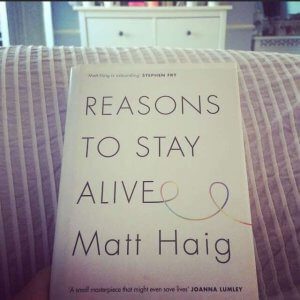 Depression and mental illness is something I’m fairly well acquainted with – I suffer from neither myself but know a number of people who do and I’ve previously run two half marathons as well as the London Marathon to raise money for Mind, the mental health charity. Despite this, however, it wasn’t until reading Reasons to Stay Alive that I was able to grasp quite how all-consuming and debilitating the illness can be.

Part memoir, part self-help book, Reasons to Stay Alive is a brutally honest account of a time when Haig came close to killing himself, and the events that followed there after. He chronicles his journey through a breakdown, anxiety and depression before writing about how he learnt to live again.

A heart-breaking, poignant and important read, Reasons to Stay Alive was described by Joanna Lumley as ‘a small masterpiece that might even save lives’ – I have little doubt it could do just that.