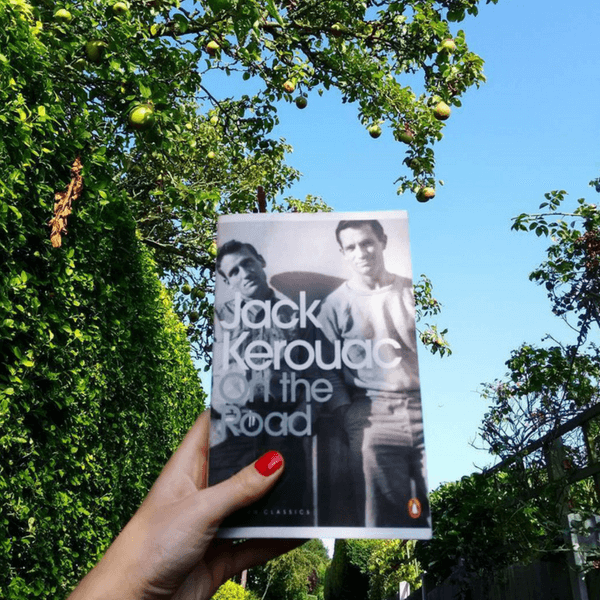 And so I’ve done it. It’s 11.08pm on the 29th of February and, by the skin of my teeth, I have managed to read the fifth and final of the books I selected for my second book challenge of the year.

I left On The Road by Jack Kerouac until the end; it was the book I knew the least about, and I figured that if I struggled with it, I would read another Roald Dahl in its place. Again, it was recommended to me – this time by someone on twitter, to whom I am now eternally grateful.

I didn’t read the introduction of the Penguin Modern Classic; I was on a tight deadline and could not have afforded the thirty pages it spanned; I also wanted to read the book with innocent eyes and no prior knowledge of what I was about to encounter.

Written in 1951, in the midst of an America fuelled by drugs, poetry and jazz music, On The Road is a largely biographical work by Jack Kerouac that was based upon numerous road trips Kerouac and his friends made across America, from East Coast New York, to the hills of San Francisco. At the time of its publication, the New York Times said thus: “the most beautifully executed, the clearest and the most important utterance yet made by the generation Kerouac himself named years ago as “beat,” and whose principal avatar he is.”; quite an accolade to have earnt.

Both poignant and passionate, the novel tells the story of Sal Paradise as he travels back and forth over American soil. Much of the tale highlights the friendship between Paradise and Dean Moriaty, characters based on Kerouac himself and his friend Neal Cassady; indeed the most prominent relationship in the text. It is the ultimate of road trips; the characters live recklessly; the pace of life is fast. To Sal Paradise, friendship and experience are everything; and both themes play a strong part throughout the novel.

Whilst lacking a traditional plot, the novel captures moments in time and flashes of life in a unique and eloquent manner. And as the text progresses through the life of the protagonist, a subtle sadness descends upon the book as Sal Paradise begins to leave behind his careless youth, thus seeing friendships drift apart, and dreams forgotten along the way.

Evocative and exuberant, Kerouac’s American Dream is beautifully written, and paints a wonderfully nostalgic picture of America. Few books take my breath away; this one absolutely did.

About On The Road

When Jack Kerouac’s On the Road first appeared in 1957, readers instantly felt the beat of a new literary rhythm. A fictionalised account of his own journeys across America with his friend Neal Cassady, Kerouac’s beatnik odyssey captured the soul of a generation and changed the landscape of American fiction for ever.

Influenced by Jack London and Thomas Wolfe, Kerouac always wanted to be a writer, but his true voice only emerged when he wrote about his own experiences in On the Road. Leaving a broken marriage behind him, Sal Paradise (Kerouac) joins Dean Moriarty (Cassady), a tearaway and former reform school boy, on a series of journeys that takes them from New York to San Francisco, then south to Mexico. Hitching rides and boarding buses, they enter a world of hobos and drifters, fruit-pickers and migrant families, small towns and wide horizons. Adrift from conventional society, they experience America in the raw: a place where living is hard, but ‘life is holy and every moment is precious’.

Jack Kerouac was born Jean-Louis Lebris de Kerouac on March 12, 1922, in Lowell, Massachusetts. Jack Kerouac’s writing career began in the 1940s, but didn’t meet with commercial success until 1957, when On the Road was published. The book became an American classic that defined the Beat Generation. Kerouac died on October 21, 1969, from an abdominal haemorrhage, at age 47.