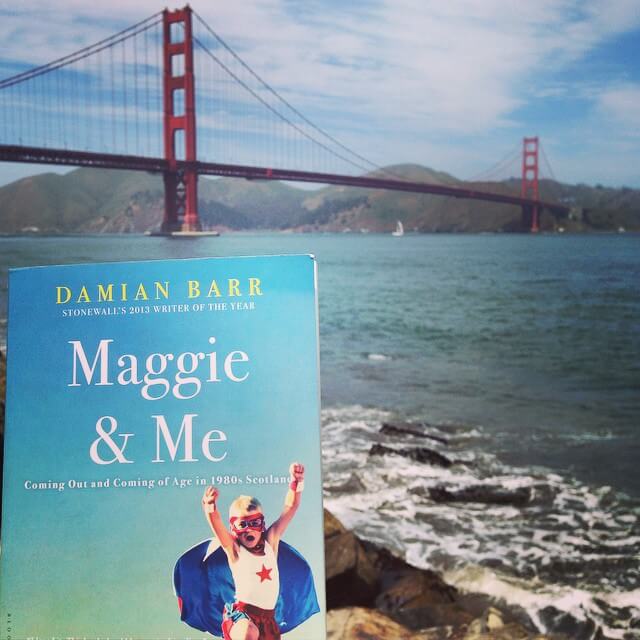 In terms of timing, the publication date of Damian Barr’s memoir – Maggie & Me – could not have been more apt. Margaret Thatcher’s died just seventeen days before Maggie and Me was released, and thus the book was welcomed into something of a media circus surrounding the iron lady’s death.

The memoir begins in 1984 when Damian sees an IRA bomb blow apart the Grand Hotel in Brighton on TV – miraculously, Margaret Thatcher survives and each of the seventeen chapters begins with a quote from the prime minister – a woman who, in both life and death, very much divided the opinion of society. Growing up in small-town Scotland to a Catholic mother and a Protestant father who separate when Damian is just a young boy, he recalls a childhood littered with violence, alcoholism and poverty and the resounding desire to make something of himself.

A fan of the series Mr and Mrs Hart which is centred around two glamourous American journalists, Damian decides he too wants to be a journalist – and sees it as a way out of Scotland’s desolate streets. And thus, against the back drop of a very broken home, and despite being relentlessly bullied for being a ‘poof’ and a ‘princess’ he excels at school, and under the instructions of Maggie Thatcher comes out the other side all the stronger for it.

While there’s no denying that the childhood depicted in Maggie & Me was one of strife, at no point in this memoir did Damian portray himself as a victim; indeed the wit and the warmth that the writer clearly possesses in abundance shone through every chapter. A tale of strength, of survival and of seeing an opportunity in every difficulty, Maggie & Me is a heart-warming, poignant read that offers a refreshing view of Britain’s only female prime minister.

October 12, 1984. An IRA bomb blows apart the Grand Hotel in Brighton. Miraculously, Maggie Thatcher survives. In small-town Scotland, eight-year-old Damian Barr watches in horror as his mum rips her wedding ring off and packs their bags. He knows he, too, must survive.

Damian, his sister, and his Catholic mum move in with her sinister new boyfriend while his Protestant dad shacks up with the glamorous Mary the Canary. Divided by sectarian suspicion, the community is held together by the sprawling Ravenscraig Steelworks. But darkness threatens as Maggie takes hold: she snatches school milk, smashes the unions, and makes greed good. Following Maggie’s advice, Damian works hard and plans his escape. He discovers that stories can save your life and — in spite of violence, strikes, AIDS, and Clause 28 — manages to fall in love dancing to Madonna in Glasgow’s only gay club.

Maggie & Me is a touching and darkly witty memoir about surviving Thatcher’s Britain; a story of growing up gay in a straight world and coming out the other side in spite of, and maybe because of, the Iron Lady.

Damian Barr, is a writer, columnist, playwright and salonnière. He has co-written two plays for BBC Radio Four and his first book was published by Hodder. Get It Together made the quarterlife crisis the must-have modern malaise. He has been shortlisted for a British Press Award and written for The Times, Telegraph, Financial Times, Guardian, Independent, Evening Standard, Esquire, Harpers, Arena, GQ and Granta.

He made headlines as the world’s first ‘reader in residence’ travelling the world reading stories aloud to hotel guests in his PJs. He is creator and host of the hugely successful Shoreditch House Literary Salon whose guests include Diana Athill, David Nicholls, John Waters, Helen Fielding, Geoff Dyer and James Frey. He also runs Reading Weekend. At home in Brighton Damian grooms his fancy chickens and tirelessly mixes cocktails in his quest for the perfect martini.