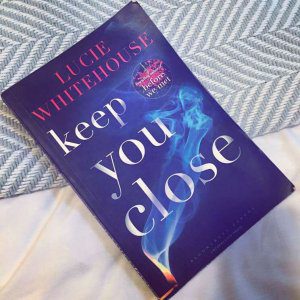 There are a small number of writers whose newest releases I eagerly await – those whose websites and social media channels I check every few months, hoping for an update on when they might be releasing their next novel. And since reading Lucie Whitehouse’s debut – The House at Midnight; which remains a book I recommend to many – a number of years ago, she has become one of the select few. Not too dissimilar to Donna Tartt’s The Secret History, The House at Midnight is the tale of a heady summer a set of friends spend between Oxford and London, and it’s a book I have promised myself for years I would return too.

Thus it was with much delight that shortly after having finished reading the BBC Top 100, I discovered that Lucie Whitehouse was set to publish her fourth novel – and one that she described as being most similar to The House at Midnight – Keep You Close.

Also set between Oxford and London, despite currently living in Sydney, I was immediately enticed by her descriptions of these two cities, and found myself transported to the cobbled streets of Oxford; its medieval centre, Covered Markets and the many colleges that line its streets. And while I read it in the midst of an Autumnal heatwave, I longed for the bitter winter chill so synonymous with the books pages.

A thriller of the most compelling sort, Keep You Close is the story of brilliant young painter Marianne Glass, who falls to her death. And while her nearest and dearest believe it was an accident, Rowan Winter, once her closest friend, knows it wasn’t, and a series of unanswered questions are left in her wake.

And as Rowan delves deeper into the life of Marianne, and the art circles in which she mixed, she soon becomes convinced that something was very, very wrong, and all was not as it at first had seemed.

A captivating, atmospheric, wonderfully written novel with a suitably climatic end, Keep You Close has all the ingredients of a page-turner, and is yet another triumph from one of my go-to writers.