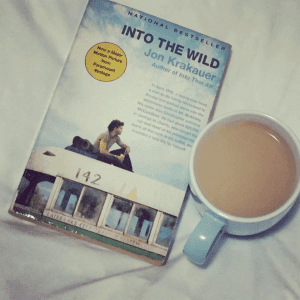 Into the Wild is one of those books that has been on my radar for a while; and indeed no sooner had I started reading it that almost everyone around me began professing their love for what is probably Jon Krakauer‘s best known book. I’m not sure where I got my copy from – whether it travelled with me from my home in London or if I’ve acquired it since living in Sydney, but a recent trip to Byron Bay seemed the perfect time to see if the tale lived up to its hype.

Published in 1996, Into the Wild is an extension of what was originally a 9,000 word article written by Krakauer which appeared in the January 1993 issue of Outside, detailing the death of Christopher McCandless. The son of wealthy parents, shortly after graduating McCandless donated his law-school fund to Oxfam and cut ties with his family before setting out on what he hoped would be an unforgettable journey into the Alaskan wilderness.

What follows is a tale of adventure and hardship, as McCandless rejects both conformity and materialism to live in the wild. With just rice, a rifle and reading material for company, he spent approximately 119 days in the wilderness, living off roots, berries and game, while keeping a journal documenting his odyssey.  And while much debate has since surrounded the cause of McCandless death; at the time of writing Into The Wild, the author deemed it to be due to the consumption of poisonous potato seeds.

McCandless’ demise was gut-wrenching to read, and while many claim he had a death wish, Krakauer opines that wanting to die is a very different thing from being compelled to look over the edge. A haunting, riveting account of McCandless’ travels and travails, and the impact he had on those with whom he came into contact, Into the Wild is a thought provoking book about an ill-fated pilgrimage and a stand against consumerism.

RELATED:  Review: The Sea Between Us - Emylia Hall