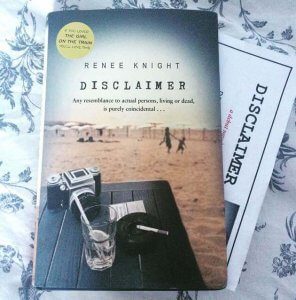 Despite having set myself a rather strict reading schedule this year, consisting of the BBC’s Top 100, the Baileys Prize shortlist, and very little else, of late I’ve found myself veering from the path. A recent article in Stylist Magazine reviewing the latest wave of thrilling page-turners by women writers proved too much to resist and soon after I added Disclaimer by Renee Knight to my reading pile.

Disclaimer, a chilling debut by Renee Knight – alumni of Faber Academy’s much revered novel-writing course – is a suspenseful tale that enthrals its reader from the get-go. Successful career-woman Catherine Ravenscroft discovers a novel on her bedside table amid the chaos of moving house, and is shocked to read about a horrific event in which she was involved many years before that she had thought was well and truly buried. Never having revealed her harrowing secret to her husband or son for fear of the consequences, Catherine is now fearful of who has come to discover the truth having faithfully guarded it for so many years.

With an intriguing and fast-paced plot, and a sharp twist that turns the tale on its axis, it’s no surprise that Disclaimer not only caused a bidding war but has since generated significant film interest. A page-tuner of the finest kind, I defy anyone to linger over this brilliant debut.