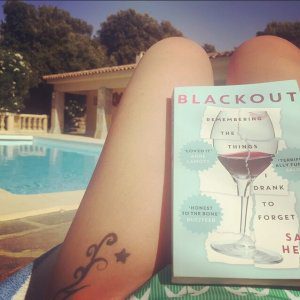 As much as I try to avoid reading two books simultaneously, sometimes the temptation proves too much. And thus is was that 1300 pages into Tolstoy’s War & Peace, I succumbed to the pull of Sarah Hepola’s Blackout. Prior to reading it I’d read a number of extracts online, and decided that Hepola’s memoir of addiction and recovery offered a more enticing read while holidaying in Corsica than Tolstoy’s epic tale was able to.

Brutally honest from the get-go, Blackout is a frank account of the author’s decent into alcoholism and her subsequent recovery. Hepola began drinking at an early age: her first blackout took place on her thirteenth birthday and many more were to follow over the next two decades as her dependence on alcohol grew. And what began as a love for cocktail bars and late-night parties soon turned into something of a social demise, as Hepola would find herself the morning after the night before with little or no recollection of what had taken place the previous evening.

As the blackouts continued to amass, friendships began to falter and Hepola subsequently made the decision to give up alcohol for good. What follows is a tale of realisation and recovery that is poignant and revealing in equal measure and will no doubt be a frank insight into the dangers and consequences of alcohol for many readers who view the substance as little more than harmless fun.

An intriguing and inspiring memoir on addiction, Blackout is, ultimately, an uplifting success story of triumph in the face of adversity.