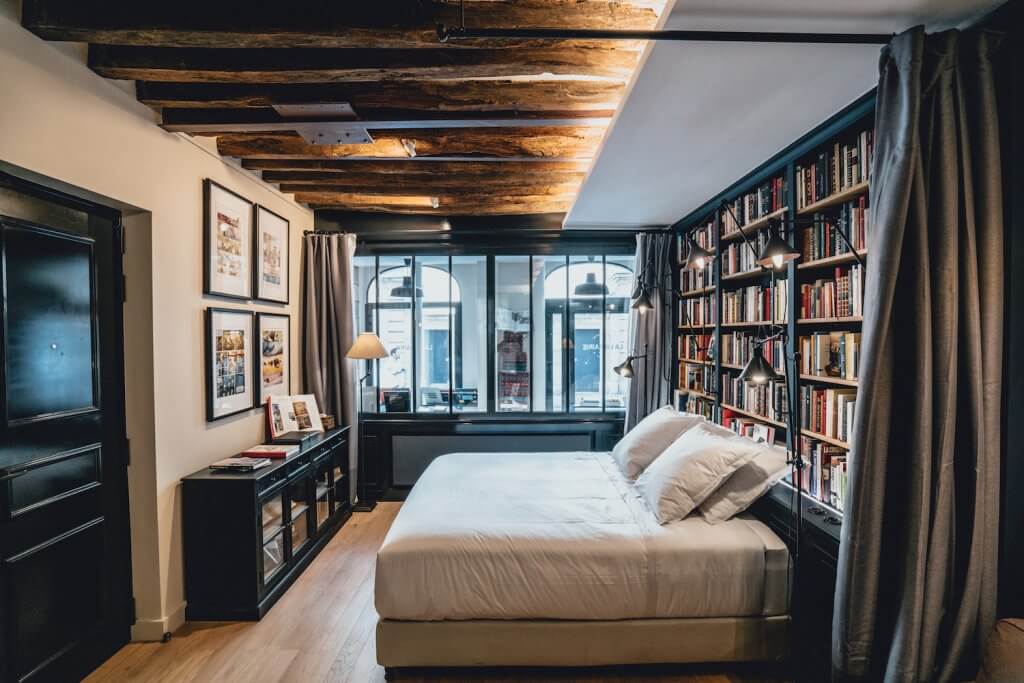 For any bookworm worth their salt, Paris is an unequivocally dream destination. Home to the much loved literary landmark Shakespeare and Company – an English language bookshop opened in 1919 by Sylvia Beach, which erudite heavyweights such as James Joyce and Ernest Hemingway used to frequent – it’s a city that also boasts over 200 independent outdoor booksellers, or “bouquinistes“, offering some 300,000 collectable, new and used books and magazines under open skies. Add in to the mix the ample amount of tomes set against a Parisian backdrop – from Hemingway’s A Moveable Feast, to Orwell’s Down and Out in Paris and London, to the more contemporary but equally brilliant The Lollipop Shoes by Joanne Harris – and you have yourself one of the most brilliantly bookish cities in the world. 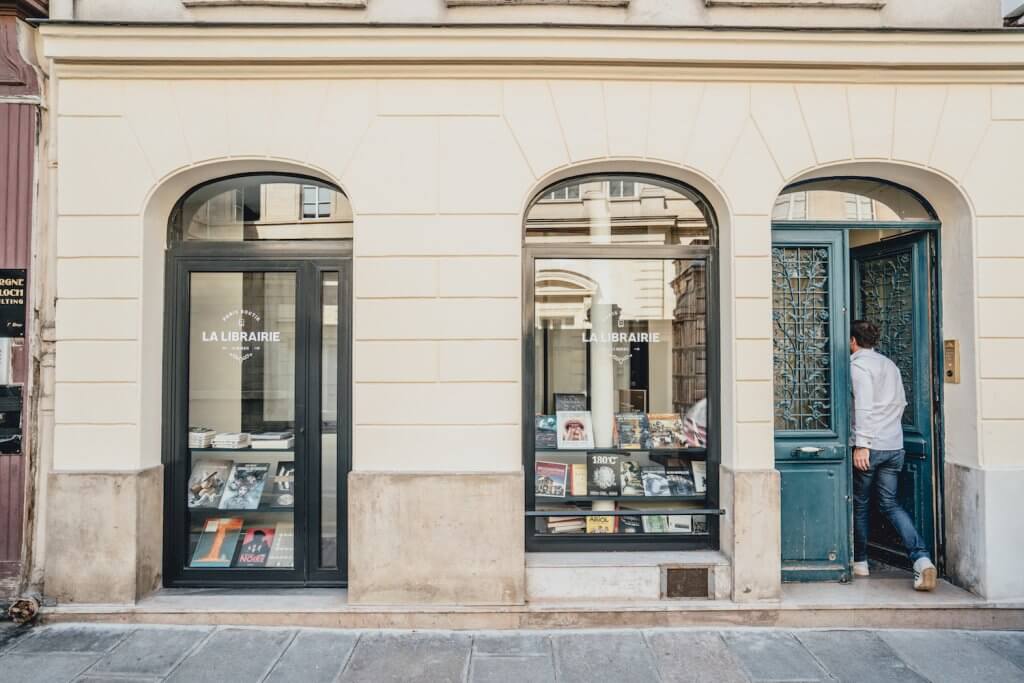 And thus it was with some delight that I first found out about boutique hotel Paris Boutik and their aptly named La Librairie Suite. Nestled in the heart of Le Marais –  a historic district of Paris that radiates charm and beauty in abundance, with cobblestone walkways a-plenty, winding streets, hidden courtyards and ivy-covered shop fronts that are oh-so perfectly Parisian – La Librarie Suite is the perfect fusion of a real Marais bookshop, and a luxury boutique apartment. Guests can sleep among the pages of 4500 tomes – many of which are written in French – from much loved classics to contemporary tales – while stylish comic book art decorates the walls. Should guests be feeling of a generous disposition they can leave their own favourite book behind for future visitors to read; and anyone who finds themselves enraptured with a new tome can take their discovery with them.

Cited by Time Out as one of the most Instagrammable hotel suites in Paris, it’s easy to see why. The brainchild of David Lécuiller (formerly of L’Oréal), in 2016, David spearheaded a plan to take over Paris boutiques that had closed and convert them into suites with services. In Paris Boutik’s La Librarie Suite, the opening looks like a traditional bookstore, but inside guests will find an elegantly styled room with rough stone and wood, more books than even the most ardent of readers could aspire to get through, a coffee machine for that morning caffeine hit so synonymous with the city of romance, and the most plush and pleasant bed one could hope to find in a Parisian bookstore. The perfect place for both people watching or curling up among the cloud-like covers to while away an afternoon between the pages of a good book, few places get better than this.

The ultimate way to experience the spirit of Paris through its now-disappearing authentic shops, Paris Boutik’s La Librairie Suite truly is a booklovers’ dream. Perfectly Parisian and oh-so brilliantly bookish, ’tis a hidden literary gem among the cobbled streets of Paris and one for the bucket list of all bookworms far and wide. Read on to find out more about The Literary Edit’s visit… 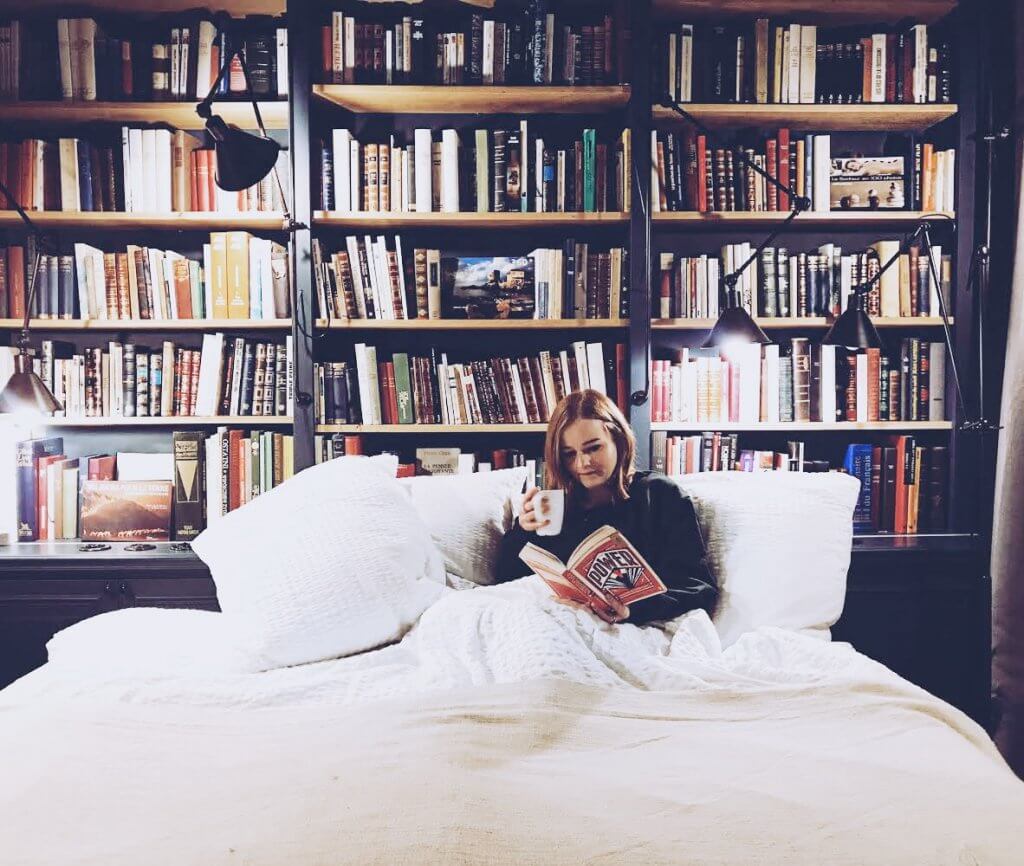 It’s Paris. There’s the gentle pitter patter of rain on the roof. You’re surrounded by centuries of literature and art. There’s incredibly well heeled women and men everywhere you turn, elegantly puffing on Vogues, looking like they’ve just walked out of French Vogue. Is it early January in the 1900s? No, it’s 2018 and you’re in Paris Boutik’s Librarie de Marais during Fashion Week.

This perfectly placed boutique hotel is both a bibliophiles and Francophiles dream alike. Steps away from bustling cobbled streets full of international cuisine in Paris’s Marais district, you’re never far away from new tastes and new sights – that’s if you ever manage to pull yourself away from the suite. 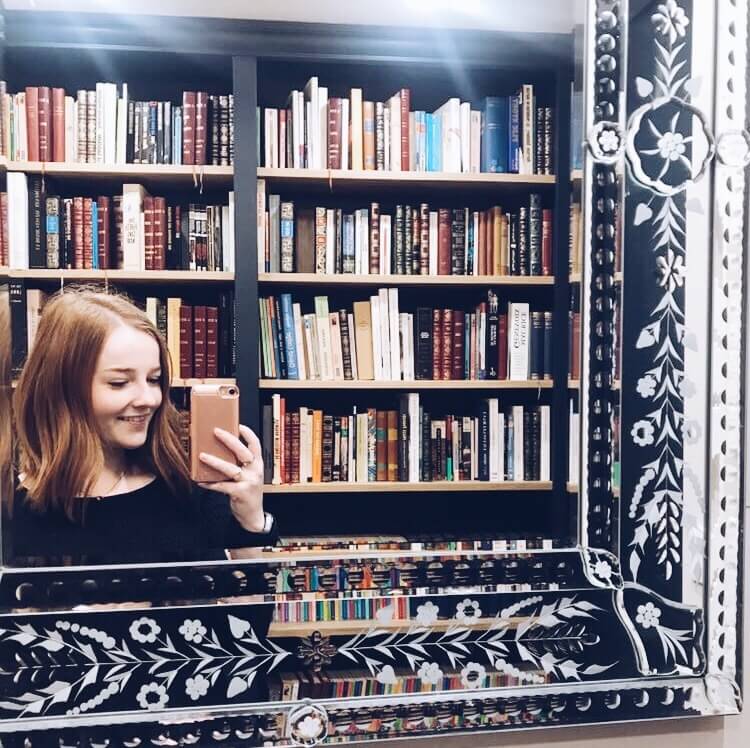 A collection of bandes dessinees (or Franco-Belgian comics to the non-French speaking among us) displayed in the study, Nobel prize winning literature in the bedroom, Dickens in the boudoir and the most chic array of lights you could ever wish for. It’s a wonder we saw any of Paris at all.

And a word to the wise, set two alarms in the morning – not only is the suite incredibly insulated from passers by in the street, but the bed is so comfortable you may never want to get out of it (and I wouldn’t judge you for it).

Looking for some tips on the crème de la crème of cool neighbourhoods and off beat spots in the City of Lights? This fabulous four-day itinerary has everything you need and more.